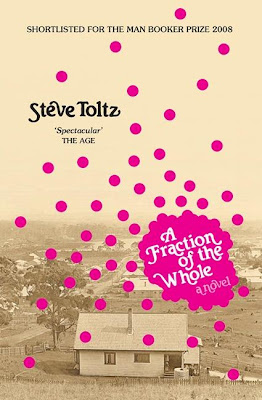 Never mind the width, feel the quality. A Fraction of the Whole is the huge, sprawling debut novel by the Australian writer Steve Toltz. Shortlisted for the Man Booker Prize 2008, the book received much critical acclaim, but has not had the commercial success that it deserves, given that it’s a modern classic. It is indeed a fat book, but it’s anything but heavy going, being very light on its feet, skipping from anecdote, to rant, to reflection, like a stone skimming across a (very large) pond.

The title comes from a quote by Emerson: “The moment we meet anybody, each becomes a fraction”. The book has the weight and complexity of a masterpiece, but is written in the style of a stream of consciousness. It recounts an amazing adventure, full of surprises and unexpected turns, often very funny, but equally a very moving story. It covers such a breadth of topics that each page seems to be bursting with new ideas. There are many observations about human behaviour, frequently illuminated by witty one-liners. This fascinating book is crammed with contradictions: sad yet hilarious, ridiculous yet accurate, meandering yet incisive.

Defying description, the book is actually in three parts (fractions of the whole, if you will), following the adventures of the eccentric Dean family. The story is narrated from two points of view: Martin Dean and his son Jasper. 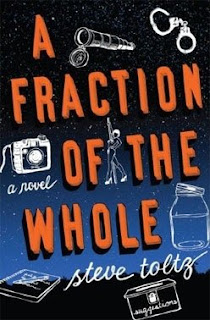 Martin Dean is a paranoid genius, eager for recognition, but wanting to be left alone. Philosophical and intelligent, this complex man’s sanity may be debatable, but he also has a profound understanding of people’s motivations, gloriously constructing damning opinions of humanity. His life is over-shadowed by his brother, Terry, who was a sporting hero as a child and a criminal mastermind as an adult. Martin blames most problems in his life on the fact that his brother is Australia’s most violent and best-loved criminal (in the manner of a latter day Ned Kelly). Desperate to be remembered as something more than “Terry’s brother”, Martin embarks on a series of “immortality projects”, only achieving his own identity/notoriety by committing a worse crime than his brother, thus becoming the most hated man in Australia.

However, it is Jasper’s relationship with his dysfunctional father that is the central theme of the book. The spectre of his father haunts Jasper’s life, as he leads a confused childhood due to Martin’s bizarre lessons and diatribes. Although well intentioned, Martin often inflicts damage on Jasper without meaning to in an all-too-common cycle of destructive parenthood, leading to a deep well of filial resentment:

Most of my life I never worked out whether to pity, ignore, adore, judge or murder my father. One thing’s for sure. My father punished me for existing and now it’s my turn to punish him for existing. It’s only fair.

Jasper fears turning into his father, though he has a similar oddball worldview and way of expressing himself. Actually, Toltz could have given the two narrators more distinctive voices, though he has obviously decided to deliberately highlight the similarities. The irony is that the more Jasper attempts to differentiate himself from his father, the more alike they become. Martin himself believes that Jasper is a premature reincarnation of himself. The reality is that Martin and Jasper are both unpleasant people, difficult and abrasive, yet Toltz draws them with such sympathy that you find yourself liking and even caring about these characters, even as their attitudes repel you.

Come back to the five and dime, Terry dean, Terry Dean. Terry is Martin’s younger brother and Jasper’s infamous criminal uncle. Although he grew up as a natural athlete, his sporting career was over after he injured his leg defending Martin against local bullies. Terry then turns to a life of crime, gaining fame when he launches a vigilante crusade against every cheating athlete in Australia. He is eventually captured and later presumed dead when a bushfire (caused by one of Martin’s inventions) burns down the prison.

Another theme running through the narrative is the human search for meaning. The major characters are all highly cerebral, though their outlook is full of caveats and counter-arguments, as philosophy should be. Even after everything is taken away from them, they steadfastly believe in the power of thought, though they often end up thinking themselves into trouble.

It was as though great big trucks filled with words drove up to our heads and dumped their contents directly into our brains.

Although you might feel that you “have just overheard a conversation between two people who took themselves too seriously”, there is no doubt that this book will also get you thinking. Essentially, there is a very simple message here: don’t let the idiots get you down. 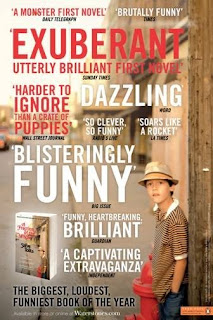 The plot is chaotic and episodic, taking you from the Australian bush to bohemian Paris to the jungles of Thailand, stopping off at strip clubs, asylums and a leaky boat in the Pacific. It is a remarkable, almost unbelievable tale with many seemingly bizarre coincidences, yet Toltz makes the unlikely events thoroughly convincing. He also never resorts to allowing his characters forget their deeply ingrained mutual mistrust and dislike, no matter how close to one another they get.

Almost all the projects start with good intentions, but end up with catastrophic results: a town hall suggestion box; a Do It Yourself guide for aspiring criminals; building a house in a labyrinth, a scheme to make everyone in Australia a millionaire; becoming an Australian member of parliament. The ideas are brilliant, but none of them work as well as the protagonists imagine. Taken individually, they are very funny, but taken as a whole, the inevitability of disaster is heartbreaking.

Almost every sentence contains a quotable aphorism, ranging from light-hearted observations on human thought to devastatingly funny comments on society:

My problem is I can’t sum myself up in one sentence.

These were big thoughts; really obese … I wanted to kiss my own brain.

As soon as my idea was embraced, I no longer liked it.

When Jasper didn’t want to start a new school, his justification was:

He couldn’t be bothered with the hassle of making a whole new set of enemies.

The male menopause is questioned thus:

There were no two ways about it: I was in a crisis. But recent shifts in the behaviour of different age groups made it hard to know what type. How could it be a midlife crisis, when the forties were the new twenties, the fifties the new thirties … I had to read the lifestyle supplement to make sure I wasn’t going through puberty.

So what if life’s a gift? Haven’t you ever returned a gift? It’s done all the time.

These quotes give a flavour of the book’s style, but every aspect of human inter-action is examined by the author, from friendship to love to treachery to forgiveness, all shot through with a healthy dose of black comedy.

A formidable cast of colourful supporting characters drifts across the story, back and forth, in and out, complementing the absurd situations. Although not as well painted as the male leading roles, the principal female characters are well served by Toltz, especially Anouk, the beautiful housekeeper who changes out of all recognition from her initial appearance keying Martin’s sports car. There is also Caroline Potts, the childhood sweetheart of both Martin and Terry; Astrid, Jasper’s mysterious European mother; and the Towering Inferno (yes, she's a tall redhead), who first shows Jasper the meaning of love. Other memorable characters include Eddie, the strange Thai doctor who frequently lends Martin money, while taking pictures of the Dean family with no explanation; and Harry West, the career criminal hired by Martin to mentor Terry in his criminal activities and author of the Handbook of Crime. 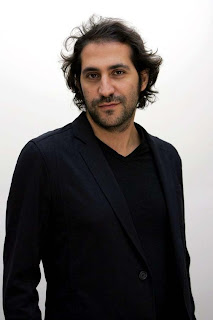 Steve Toltz has created a highly original and refreshing novel, full of surprises. His prose flows with such ease that this epic should in no way be considered daunting. He often lightens some of the more harrowing passages with the quality of his writing and surprising humour:

I would compare his style to a young Peter Carey, though I can also see elements of Jonathan Franzen and Joseph Heller, and even John Kennedy Toole in their shared love of what I shall call “knowing comedy”. However, the closest reference may well be John Irving, whose quote from the novel Until I Find You could equally apply to Jasper Dean:

In this way, in increments both measurable and not, our childhood is stolen from us – not always in one momentous event, but often in a series of small robberies, which add up to the same loss.

They fuck you up, your mum and dad.

They may not mean to, but they do.

They fill you with the faults they had

And add some extra, just for you.

The son may well pay for the sins of his father, but what a ride the Deans give us. The fractions are just fine, but the whole is indeed greater than the sum of its parts.

Posted by The Swiss Rambler at 2:49 PM