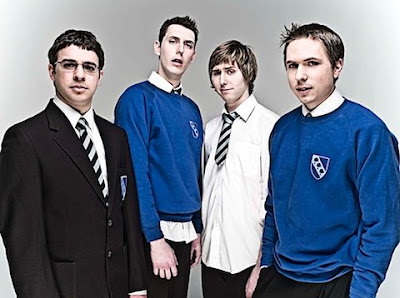 Will, Neil, Jay, Simon
While we can all agree that the general standard of British television comedy is pitifully low, every now and then you stumble across a diamond in the dustbin. One such gem is The Inbetweeners, a razor sharp celebration of the highs and lows of being a teenager. Perfectly capturing the relentless disappointment of suburban adolescence, the show follows a group of ordinary schoolboys who yearn for sex, booze and cheap thrills, without the emotional maturity, money or ID to get them. Basically, they just want to get laid. Named the best new sitcom of 2008 at the British Comedy Awards, it is about the squirming humiliations of teenage life with the four friends constantly finding themselves in embarrassing situations.

Will: We also hit a spastic with a frisbee.

None of our heroes is exceptional. In fact, they’re distinctly average. They’re not the biggest losers in class, but nor are they cool, attractive or popular. They hide from bullies, can’t pull girls and are denied service in pubs. You might think that Inbetweeners refers to that group straddling the social gulf between the in-crowd and the outcasts, but it also describes those awkward years between a teen and becoming an adult, that moment when you’ve entered puberty, but have no idea how to play it. These are pivotal times in most people’s lives.

An obvious comparison would be Skins, but The Inbetweeners are far removed from the beautiful, bed-hopping hedonists of E4’s other hit series about teenage life. While Skins is a sex and drugs filled fantasy about the youth experience, The Inbetweeners shows the way teenagers actually live their lives. The writers have flawlessly captured what middle-class teenage life is really like in their depiction of four slightly rubbish boys, so almost everybody will relate to the characters. 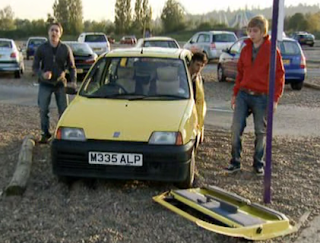 "I've been driving in my car, it's not quite a Jaguar"

It’s a bit like eavesdropping on a lads’ night out, when teenage angst and libido frequently cloud their judgment. Although there are many (painfully funny) incidents, it feels honest and, on the whole, realistic with banter that is both believable and hilarious. The main laughs come from the exquisitely accurate dialogue, which captures the feel of adolescence perfectly.

Jay: Carli doesn't really fancy you, so if you're waiting to lose it to her, you're gonna be waiting till you're dead.

Simon: I think she likes me a bit though.

And that is why it is utterly charming. It never tries to be anything it’s not; it never pretends to raise moral issues; it simply shows that being a teenager can be fun. 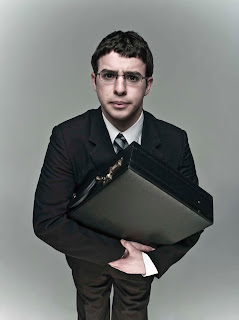 The main protagonist of the show is Will, whose parents have divorced, leading to his mum moving him out of an independent school into the sixth form at the local comprehensive. Will is a geeky, well-educated, socially inept young man, whose haughty ego battles with his crippling shyness. He desperately tries to fit in, but his efforts are immediately scuppered by the head of sixth form, who makes him wear a badge proclaiming, “My name is Will. Stop me and say hello”, leading to casual abuse from just about the whole of the school. At first his classmates hate him, but he blithely ignores their insults and insinuates himself into a group of friends, which is greatly helped when they meet Will’s gorgeous mother, who is “so sexy, she could be a prostitute”:

Jay: Have you had a wank over Will's mum?

Will: Please don't have a wank over my mum!

Neil: I can't promise that, Will.

Will is like a teenage version of David Mitchell with his pompous and patronising outbursts. He is invariably wrong, but his enthusiasm and optimism keep him going, even though this often leads him into the most awkward situations, such as when he confronts people pushing in on a rollercoaster:

(On realising that they’re mentally handicapped) … I’m the worst human being in the world.

When the boys bunk off school and get drunk, it ends badly after their parents find out what they’ve been doing all day:

Neil’s Dad: Don’t talk to me like that in my own house!

Will: Oh sorry, my manners. Piss off PLEASE!!

Neil’s Dad: I've had enough of your lip.

Will: Oh you'd like my lip wouldn’t you? Right round your bell end! If Mr. Chippy doesn’t get there first! What’s he gonna knock up, a closet for you to hide in!? You BUMDER!! 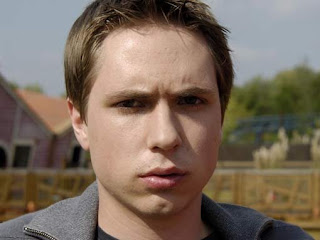 "Hopelessly devoted to you"

Simon is the romantic of the group, who is secretly in love with Carli D’Amato. Well, it was a secret until he drunkenly spray-painted “I love Carli” on her driveway. His efforts to impress Carli always end badly, most notably when he drunkenly vomits all over her younger brother. His mates are initially impressed when he is the first one of them to get a car until they realise that it’s bright yellow and would make a Lada look cool.

Jay: You dick head. They’re getting away!

Will: Jesus, you make it sound like we’re about to attack them.

Jay: I can’t believe you lost the muff wagon.

Simon: Well, what are we going to do anyway? Follow them until they’re forced to drive to a police station?!

Jay: They love it, you tool. It’s called flirting.

The useless car does at least enable them to insult the “losers” standing at the bus stop with the legendary “Bus Wankers!!!”, though this also has an unfortunate conclusion when the car stalls. 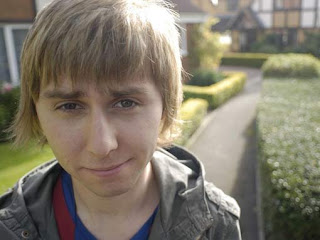 Jay is the cockiest member of the group, though in reality he’s a porn-obsessed master of exaggeration, if not downright lies, about his sexual conquests. He’s a potty-mouthed, verbal bully, who is unbelievably crude, yet extremely funny:

Jay: See you at the Fox and Hounds tonight, Neil. Oh and bring your wellies!

Jay: Cos’ you’ll be knee deep in clunge.

Simon: You wet the bed when you were ten.

Of course, once we meet the monster that is Jay’s father, we have more sympathy for him:

Jay's Dad: I know what you're up to, you think cos’ she’s so massive, she'll count as two shags. Well she doesn’t!

Will has no hesitation in pulling apart Jay’s boasts and the two quickly become verbal sparring partners:

Will: Has she got any special dietary requirements? Only I’ve never cooked for an imaginary woman before.

Jay: Well I know she’s not allergic to nuts…my nuts!

One of the funniest moments is when Jay meets a new friend, foolishly giving him the thumbs up. His mates predictably rib him mercilessly until Jay cracks, jumping up and down on the bonnet of his friend’s car, shouting out expletives in a scene reminiscent of Alan Partridge (or even Basil Fawlty) at their finest. 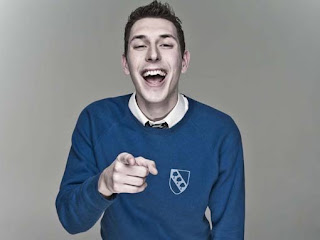 Neil is the obligatory stupid one with a vacant stare inspired by Rodney from Only Fools And Horses. He lives in a world of his own, but sometimes does say something almost profound. His uncomplicated persona, not to mention his slick dance moves, very occasionally see him triumph with the opposite sex. To his horror, his dad, a single man struggling to raise his family after his wife walked out, is often the butt of the gang’s jokes with constant aspersions cast on his sexuality:

Jay: Well...let's look at the evidence...1) your mum left him because he loves cock!

Neil: Come round tonight. My dad’s out.

Neil: No, I mean going out.

Will: That’s a euphemism.

Simon (to Neil about his new job): I suppose your dad needs the money.

Jay: Why’s he paying for rent boys then?

Neil: He's not paying for them.

Simon: What, they're freebies?!

Although the situations are funny, one of the keys to this being such a great comedy is the relationship between the main characters. The banter between them is realistic and very funny, with most discussions soon turning into arguments before coming to an end with a classic puerile insult. Some would see this as vulgar and simple, but actually it's a very accurate (and extremely funny) portrayal of male teenage mates and what they get up to.

Will: Your dad's moved out?

Simon: It's no biggie. They've not been getting on lately, so he's moved out for a few weeks while they sort stuff out.

Jay: What, like her face? It's gonna take more than a few weeks to sort that mess out.

Yes, at times it’s crude, crass and even offensive, but it never plumbs the depths of Little Britain. Granted, you have to find schoolboy sexual innuendo funny, but the script is consistently amusing with side-splitting one-liners coming thick and fast (as Jay might say). It may be immature and even childish, but that’s what gives the show its charm – a sort of down-market version of The Rotters’ Club.

The Inbetweeners is obviously aimed at young people, but it has a universal appeal and can be enjoyed by any adult with an open mind. After all, everyone was a teenager once; so older viewers can buy into a memory, rather than an actual experience. Mucking about and laughing with your mates is a timeless pursuit and The Inbetweeners captures the awkwardness, frustration and humiliation of being a teenage boy better than anything else on television in recent years. Teenage dreams – so hard to beat.