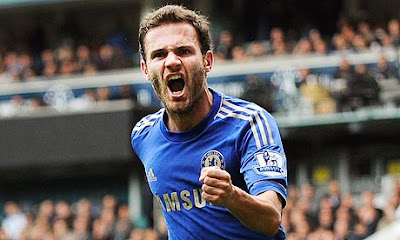 The Europa League has long been regarded by leading clubs as a poor relation to the far more lucrative Champions League, but Chelsea’s prodigious efforts after parachuting in to the junior competition might just give pause for thought, as they will end up earning more from Europe this season than any other English club.

Although they earned €5 million less than Manchester United from the Champions League after exiting at the group stage, they will receive at least €6.5 million from the Europa League, even if they lose the final. If they repeat last season’s victory in the Champions League, the sum earned will rise to around €9 million.

This means that Chelsea will receive at least €40.9 million (Champions League €34.4 million + Europa League €6.5 million), rising to as much as €43.4 million if they win the Europa League. Of course, the bad news is that this will still be significantly less than last season’s €59.9 million for the Champions League triumph - though the blow will be somewhat softened by money from the UEFA Super Cup (€2.2 million) and the FIFA Club World Cup ($4 million). 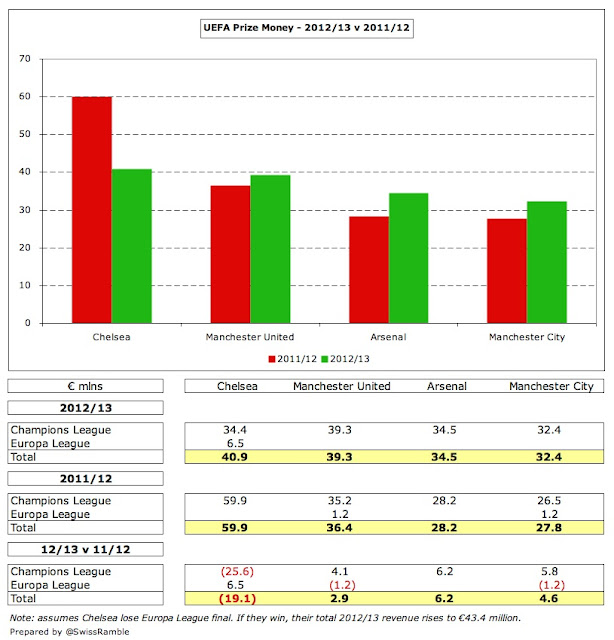 The other three English Champions League qualifiers should still be smiling though, as they have all actually earned more money this season, thanks to a substantial increase in the available prize money (around 22%).

Manchester United’s income rose €4.1 million to €39.3 million, though the difference falls to €2.9 million once the €1.2 million they received from dropping down to the Europa League in 2011/12 is taken into consideration. Similarly, Manchester City’s income increased by €5.8 million to €32.4 million, reducing to €4.6 million after deducting last season’s €1.2 million from the Europa League. Finally, Arsenal will receive €34.5 million, which is €6.2 million higher than the previous season.

As an aide-mémoire, the money for UEFA’s two tournament is divided into two parts: (a) prize money based on participation and results; (b) TV (market) pool. 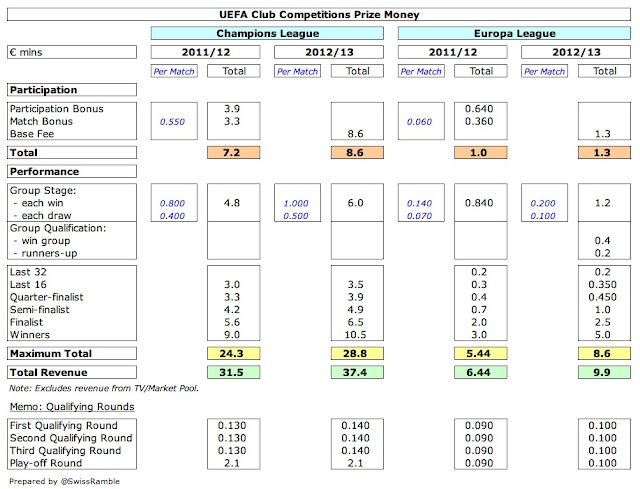 Each of the 32 teams that qualify for the Champions League group stages is guaranteed a participation base fee of €8.6 million even if it loses every single game. There is also a performance bonus of €1 million for each victory in the group stage plus €500,000 for a draw. So if a team manages to win all six of its group matches, it will get €6 million on top of the base fee.

If a team qualifies for the first knock-out round (the last 16), it is awarded a further €3.5 million, while there are additional performance prizes for each further stage reached: quarter-final €3.9 million, semi-final €4.9 million, final €6.5 million and winners €10.5 million. So if you go all the way and win the trophy, you would earn a total of €37.4 million (not counting the TV pool share), which is up from €31.5 million in 2011/12.

The principle is the same in the Europa League, though the sums involved are much smaller. Each of the 48 clubs involved in the group stages receives a participation base fee of €1.3 million. In addition, there is €200,000 for each win and €100,000 for each draw in the group stage. A new addition this season, presumably to encourage clubs to give their all, is qualification bonuses for teams that progress to the round of 32: group winners earn €400,000 and runners-up €200,000.

That’s now a pretty good incentive, compared to the €3 million paid to Atlético Madrid, the 2011/12 winners. In fact, the winning club could now receive a maximum of €9.9 million, 54% up from last season’s €6.4 million. 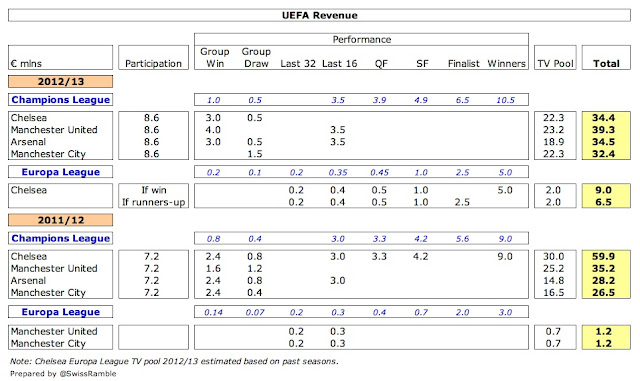 Nevertheless, it can still be a very useful boost to clubs like Chelsea that drop down from the Champions League, especially if they reach the final, which is worth either €6.5 million or €9 million (assuming €2 million for the Europea League TV pool, based on previous years). It does require Stakhanovite efforts on behalf of the playing squad, which may jeopardise their chances in their domestic league, but, as the figures above indicate, it can make a big difference.

In addition to these fixed sums, the clubs receive a share of the television money from the TV (market) pool, which is allocated according to a number of variables. First, the total amount available in the pool depends on the size/value of a country’s TV market, so the amount allocated to teams in England is more than that given to, say, Spain, as English television generates more revenue. Clubs can also potentially do better if fewer representatives from their country reach the group stage, as the available money is divided between fewer clubs.

In the case of the English clubs in the Champions League, the allocation works as follows: 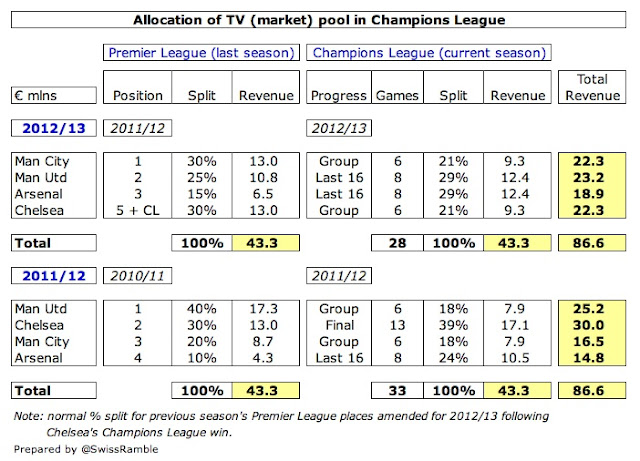 The TV pool allocation methodology can produce some results which seem strange at first glance, e.g. Manchester United and Arsenal were both eliminated at the last 16 stage, but United received €4.3 million more than Arsenal (€23.2 million v €18.9 million).

This is entirely due to United finishing one place ahead of Arsenal in the 2011/12 Premier League, so receiving 25% of that half of the TV pool (€10.8 million), compared to Arsenal’s 15% (€6.5 million). Of course, both clubs received exactly the same (€12.4 million) for this season’s Champions League progress, which incidentally was more than the €9.3 million for Chelsea and Manchester City, who both went out at the group stage.

Thus, from a purely financial perspective, it is important not just to qualify for the Champions League, but also to qualify in as high a position as possible. Fourth place may be considered a trophy these days, but second or third place are worth even more to the bank balance.

A club’s finances are also boosted if the club finishing fourth fails to win the qualifier for the group stage, as this would mean that the TV pool would then be split between only three teams instead of four. In the same way, it is better financially if the other English clubs do not progress as far as your team.

Note that these calculations assume that the total English TV pool is the same as last season, based on the Sky/ITV deal being more or less the same size, though there are some indications that it might be slightly lower. 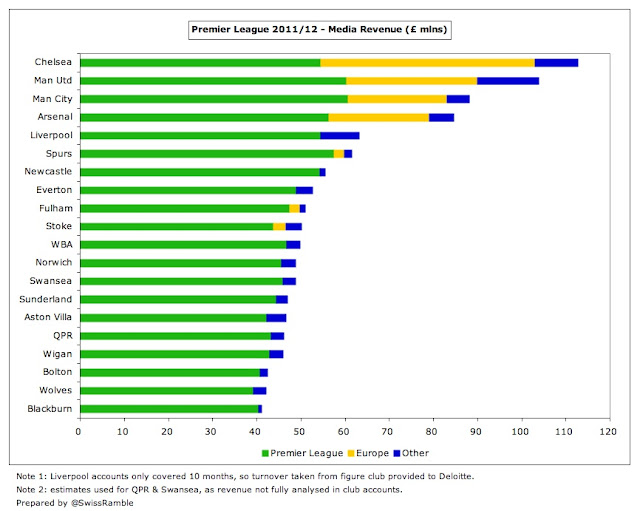 However the money is split, there is no doubt that all the English clubs playing in the Champions League have a considerable monetary advantage over the rest of the Premier League, as can be seen by the above analysis of Media revenue from last season – and that was before the 2012/13 increases. As The Clash once sang, it is indeed a “Safe European Home”, at least for a privileged few.
Posted by The Swiss Rambler at 3:52 PM