Manchester United - Higher Than The Sun 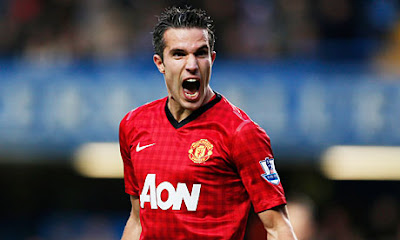 The week after they clinched the Premier League title, Manchester United announced record third quarter turnover of £91.7 million, more than 13 clubs in England’s top flight achieved in the whole of the 2011/12 season. To further place United’s incredible ability to generate revenue into context, this quarterly result was about the same as Newcastle United’s revenue last season – and Newcastle have the seventh highest revenue in England. 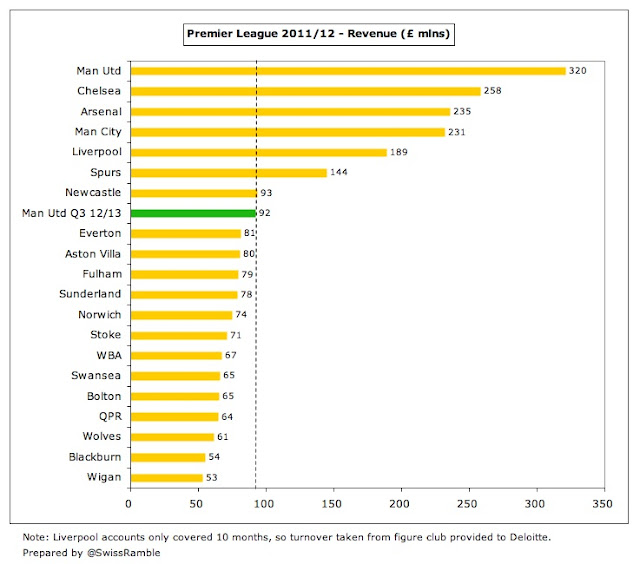 Match day revenue growth is due to the club staging three additional home matches in this quarter compared to the prior year quarter: four more FA Cup ties, offset by a one game reduction in European matches (one Champions League match less two Europa League matches).

Broadcasting revenue growth is largely due to United progressing to the Champions League round of 16, as opposed to exiting at the group stage the previous year.

However, it is the 32% commercial growth that is most impressive, driven by the addition of several new sponsorship deals. In fact, sponsorship revenue is up a cool 52% to £21.0 million, while retail & merchandising grew 10% to £9.2 million and new media and mobile rose 14% to £5.8 million. At this rate, United’s commercial revenue for the whole year could be around the same level as Real Madrid and Barcelona (around £150 million). 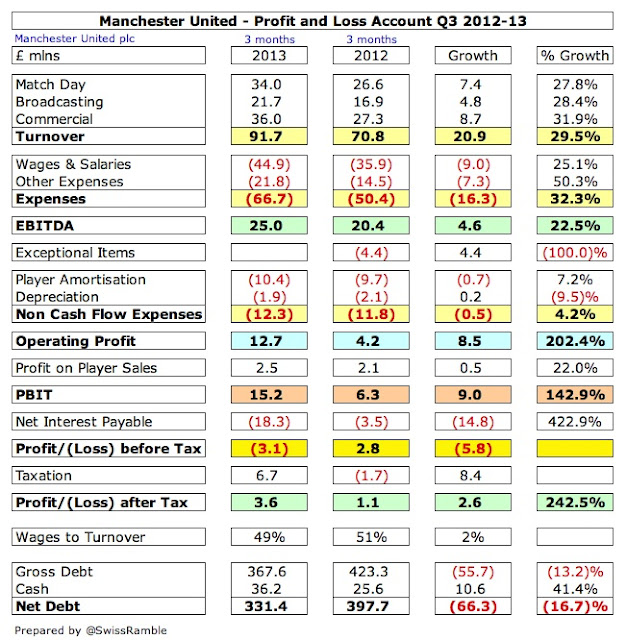 These figures include some money for the new Chevrolet shirt sponsorship deal, even though this does not fully kick in until the 2014/15 season, when it will be worth an astonishing £45 million ($70 million) compared to Aon’s current £20 million. However, United somehow negotiated for Chevrolet to pay them £11 million in each of the previous two seasons – while Aon are still the incumbent shirt sponsors. Amazing stuff.

Furthermore, the latest results do not include the new deal signed with Aon last month for the naming rights to the club’s Carrington training centre and sponsorship of the training kit and overseas tours. The club has not divulged how much this deal is worth with press estimates varying between £120 million and £180 million for the eight-year agreement, but it will certainly represent a significant uplift to the DHL £10 million training kit deal.

In addition, more money can be expected when the kit supplier deal is renegotiated for the 2014/15 season. Nike currently pay £25.4 million a season, but any replacement deal will generate considerably more with some analysts believing that this sum might double.

It’s not all good news in these figures, as wages have again grown by an unexpectedly high 25% to £44.9 million following expensive arrivals in the summer (including Robin van Persie from Arsenal and Shinji Kagawa from Borussia Dortmund), renegotiated contracts for existing players and growth in United’s commercial team. That said, the important wages to turnover ratio actually fell 2% to 49%

Similarly, other operating expenses rose a hefty 50% to £21.8 million, primarily due to the costs involved in staging the additional home games.

Once again, United’s profits were hit by net interest payable, which increased £14.8 million to £18.3 million, even though gross debt was £56 million lower than this time last year at £368 million. The increase was largely due to £15.7 million of adverse exchange rate movements after translating the US dollar denominated senior secured notes into Sterling. It should be noted that this is an unrealised FX loss that has no cash impact until the secured notes mature in 2017.

In fact, the interest payable is enough to produce a small £3.6 million pre-tax loss (compared to £2.8 million profit last year), though this becomes a £3.6 million post-tax profit after booking £6.7 million of non-cash tax credits (reflecting a lower effective tax rate). 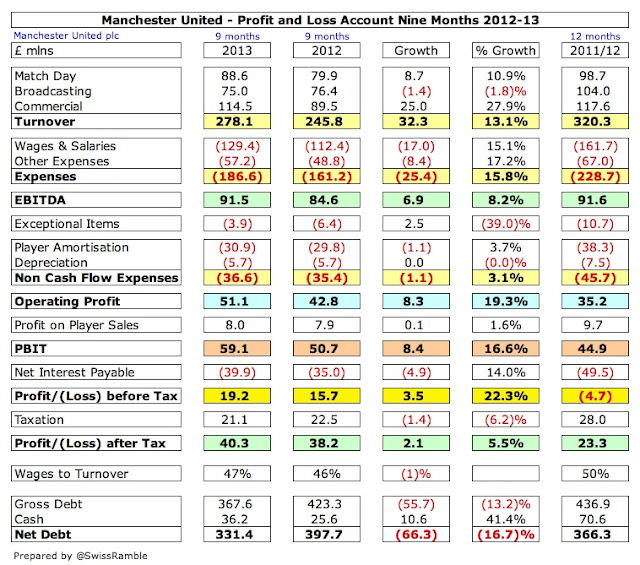 Of course, one swallow does not make a summer and we should not attempt to draw too many conclusions from one quarter in isolation. If we look at the first nine months of the 2012/13 season, revenue of £278 million is 13% up on the same period for the prior year. That’s still very impressive, but not as much as Q3’s 30%.

Nevertheless, profit before tax rose 22% to a very healthy £19.2 million (up from £15.7 million in 2011/12) with profit after tax even higher at £40.3 million, thanks to £21 million of tax credits. This could be a factor for a while in United’s figures, as the Q2 statement referred to £60 million of unrecognised deferred tax assets being available (of which £6.7 million was used in Q3). 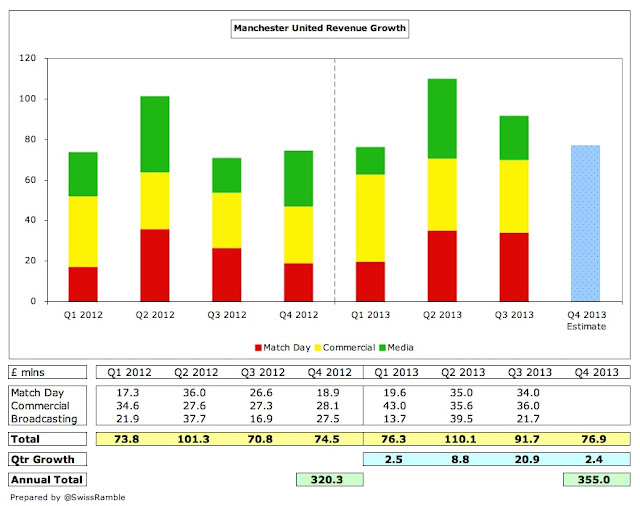 All football clubs are affected by the seasonality of revenue, especially the phasing of matches, which not only affects gate receipts, but also TV money (in terms of Premier League merit payments and European distributions). This means that traditionally most revenue is recognised in Q2 and Q3. 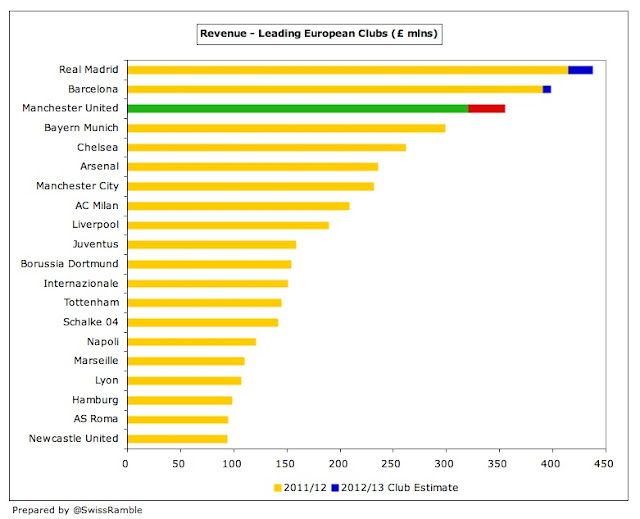 After that growth, United would remain the club with the third highest revenue in the world, though the gap to Real Madrid and Barcelona would reduce (based on the Spanish clubs’ budgets). In 2011/12 United were £71 million behind Barcelona in second place with £391 million, but the difference would be only £25 million at current exchange rates. In fact, the real gap would be even smaller, but for the weakening of the Pound, which has boosted overseas clubs’ revenue in Sterling terms. 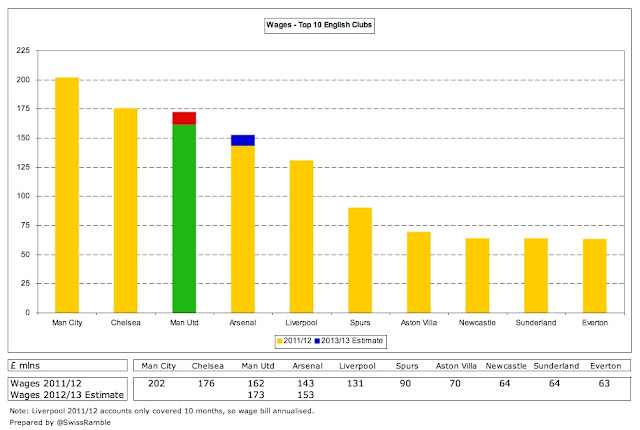 If we annualise United’s nine month wages of £129 million, that implies an annual wage bill of £173 million, which would be around the same level as Chelsea’s 2011/12 figure and is around £20 million more than Arsenal’s estimate of £150-155 million. Of course, the calculation is not quite that simple (e.g. if we were to annualize Q3 alone, that would give £180 million), but it’s an interesting indication of the continuing wage inflation facing Manchester United. The good news is that gross debt continues to fall, down from £437 million in June 2012 to £368 million in Q3 following the repurchase of £63 million of bonds. In fact, gross debt has been greatly reduced since the £773 million peak in 2010 with the hideously expensive PIKs now repaid. That said, United’s debt is still far higher than any other club in the Premier League with the next highest being Arsenal at £246 million.

United again demonstrated their ability to generate vast amounts of cash from their football operations with £57 million, spending a net £33 million on players (£41 million player purchases less £8 million sales), £11 million on infrastructure (property and equipment) and £2.7 million to complete the purchase of the club’s own TV channel, MUTV. 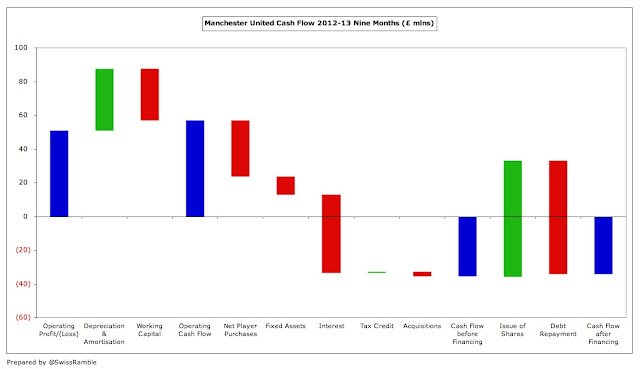 However, they also shelled out £46 million in interest payments and used the £69 million net proceeds from the IPO to fund £67 million of debt repayment. In the whole of 2011/12 United paid out £46 million in net interest, which was about the same as all other Premier League clubs combined.

So, this is a very good set of figures from Manchester United with even more growth to come, both from the seemingly never-ending stream of new sponsors and the blockbuster Premier League TV deal, which should be worth at least another £30 million. Indeed, Ed Woodward, the executive vice-chairman who will succeed David Gill as chief executive in July, said that the club still had plenty of untapped markets where they could sign sponsorship deals: “The opportunity remains huge.”

Wages growth is cause for some concern, though this will not be a major issue if revenue continues to grow apace. Moreover, under the Premier League Financial Fair Play (FFP) regulations, clubs with wage bills above £52 million will only be allowed to increase their wages by £4 million per season for the next three years. That said, the restriction only applies to TV money, so clubs are free to spend any additional income from ticket sales or commercial deals on wage growth. This caveat gives United plenty of flexibility with their demonstrable talent for increasing commercial income.

The one major irritant for United fans remains the high debt incurred as a result of the Glazers’ takeover, resulting in another £46 million leaving the club in the form of loan interest in the first nine months of 2012/13. Whatever praise the owners receive for their commercial acumen, there is no doubt that this money could be better used elsewhere. As the late, great Ian Dury once said, “What a Waste”.
Posted by The Swiss Rambler at 2:31 PM