Stoke City - You Better You Bet 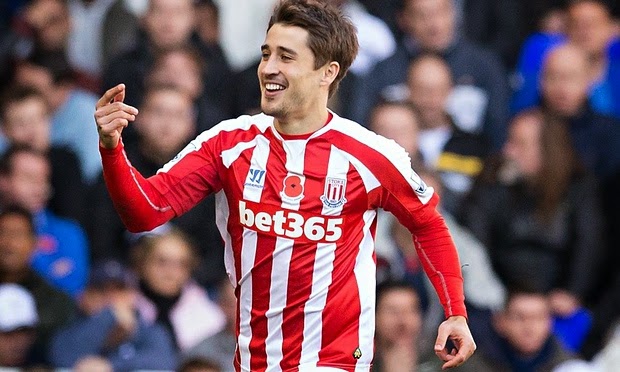 Year after year Stoke City make it clear that the club’s primary objective is to “maintain its Premier League status” and that was duly achieved in 2013/14, as they finished in a comfortable 9th position. This means that Stoke are now in their seventh consecutive season in the top league.

Once again, the support of the Coates family’s investment in Stoke City through their company bet365 was critically important, as they provided an additional loan of £15 million to fund further investment in the playing squad, increasing the club’s debt to their owners to £57 million.

For a long time the owners have been “committed to reducing the club’s reliance on bet365 and, over the medium term, to make it self-sufficient” and the latest financial figures make this seem a lot more likely than before. 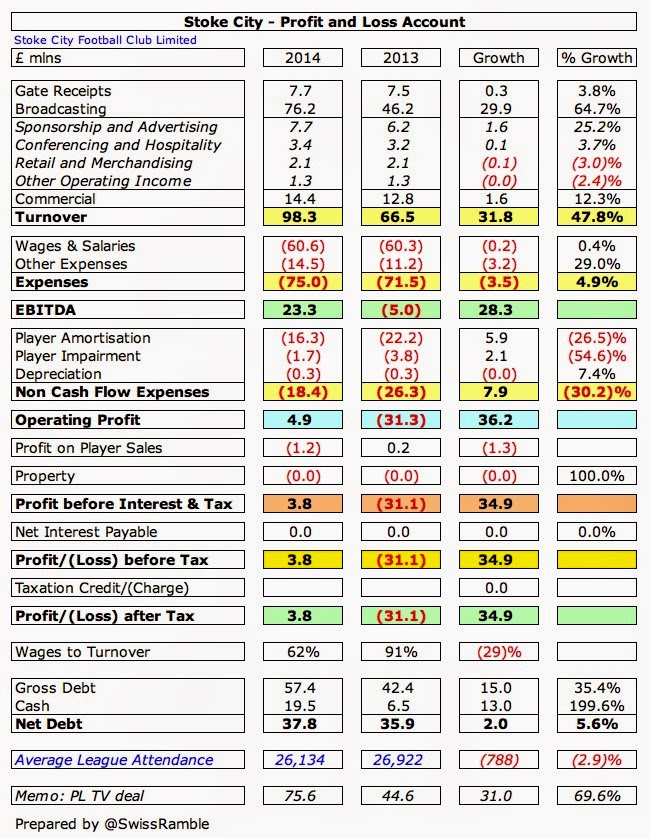 The £35 million profit improvement was almost entirely due to the new Premier League television deal £31 million plus an £8 million reduction in player amortisation/impairment, partly offset by a £3 million increase in other expenses. 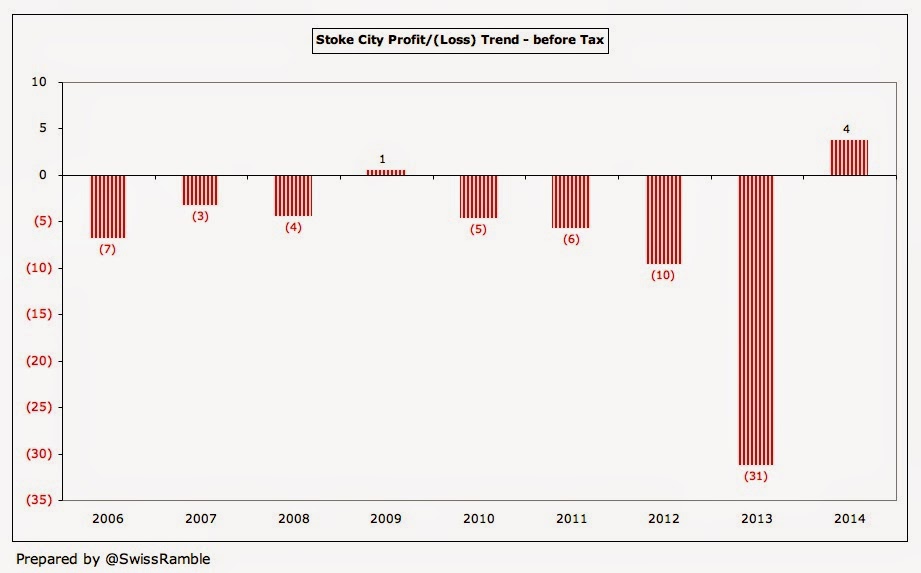 This was the first time that Stoke had made a profit since 2008/09, when they registered a small surplus of £0.5 million in their first season back in the top flight. In fact, in the eight seasons leading up to 2013/14 the club had made cumulative losses of £64 million. In fairness, nearly half of that (£31 million) came last year as Stoke invested heavily to ensure that they remained in the Premier League in order to benefit from the new TV deal. 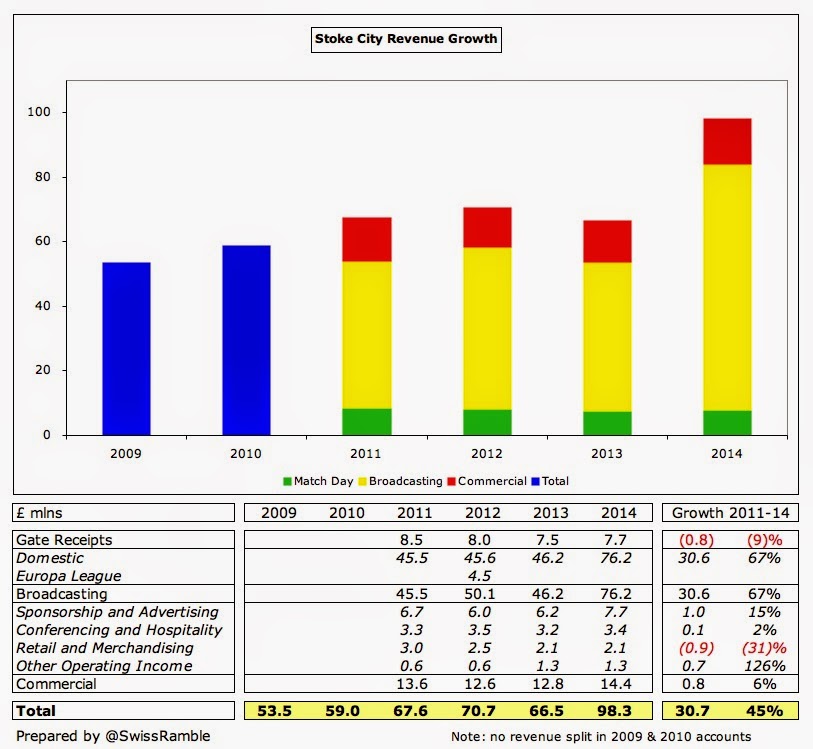 To be fair, 2010/11 was arguably the most successful campaign in Stoke’s history, as they reached the FA Cup final for the first time and qualified for Europe as a result, because the eventual winners Manchester City went into the Champions League. In financial terms, that success boosted gate receipts and merchandising sales in that season. The following year was then inflated by £4.5 million generated from the Europa League run. 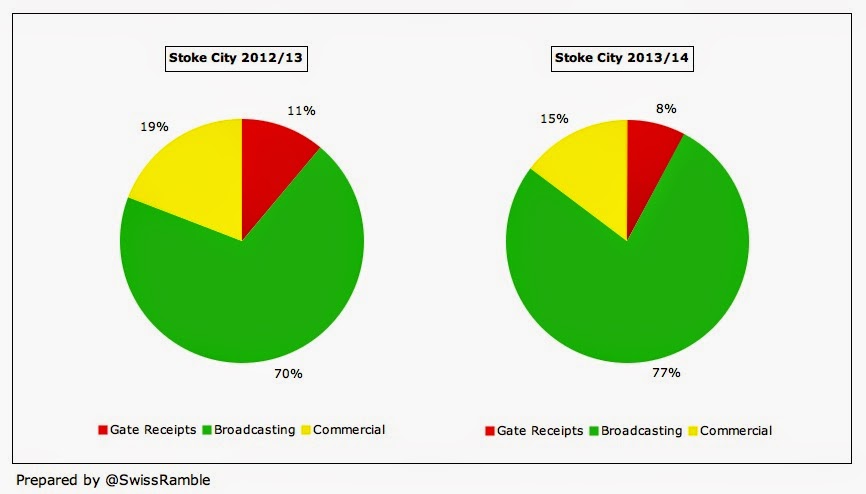 The increase in TV money means that Stoke’s turnover is now even more reliant on this revenue stream, increasing from 70% to 77%. Commercial income is down to 15%, while gate receipts only contributed 8% of total revenue in 2013/14. 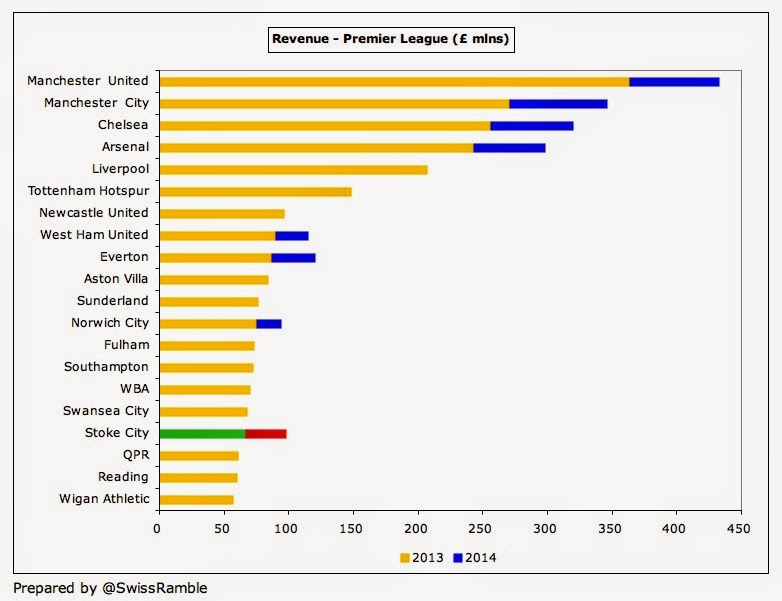 Stoke’s achievement in staying in the Premier League for so long is really placed into context when you compare their revenue to other clubs. In 2012/13 Stoke’s revenue of £66.5 million was the 17th highest in the top tier, only above QPR, Reading and Wigan, i.e. the three clubs that were relegated that season.

Although Stoke’s revenue significantly increased in 2013/14, every other club will report similar growth, as they all benefit from higher distributions from the new Premier League TV deal. Furthermore, the leading clubs enjoy massively higher revenue, e.g. Manchester United’s £433 million is more than four times as much as Stoke’s £98 million. 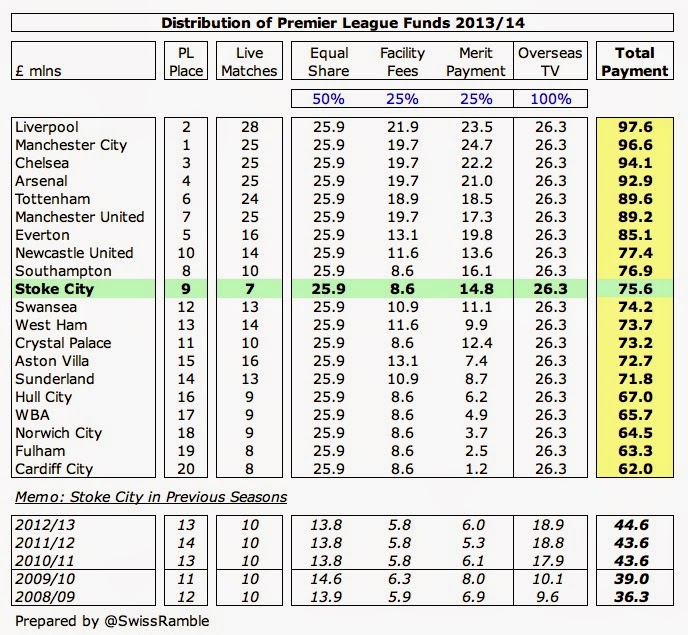 Stoke’s share of the TV deal increased by an amazing 70% (£31 million) from £45 million to £76 million, not just because of the new deal, but also partly due to a higher merit payment, as they finished 9th compared to 13th the previous season.

It should be noted that the majority of the money is distributed equally among all Premier League clubs (50% of the domestic deal and 100% of the overseas deals), but there are different payments depending on where a club finishes in the league table (merit payment) and how many times the club is shown live on TV (facility fees).

Some critics have derided Stoke’s rather rudimental playing style, which (rightly or wrongly) might help explain why Sky broadcast them so infrequently. Each club is guaranteed a minimum facility fee based on 10 live games, but Stoke were only shown seven times in 2013/14. 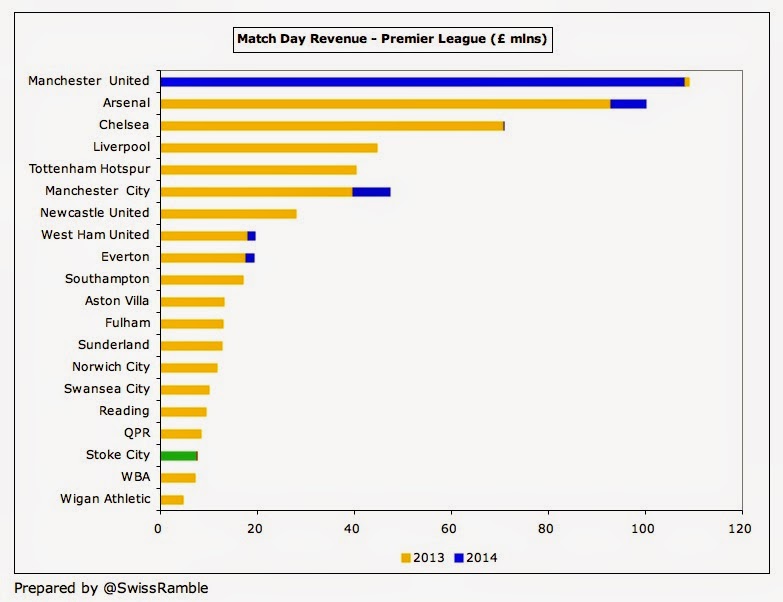 Although gate receipts increased from £7.5 million to £7.7 million, this remains one of the lowest in the Premier League. At the other end of the spectrum, Manchester United and Arsenal both earn more than £100 million of match day revenue, which works out to around £3.5 million a match. In other words, they generate almost as much as Stoke’s annual gate receipts in just two matches.

Stoke have secured planning permission to expand the 27,700 capacity of the Britannia Stadium to around 30,000, but those plans are apparently on hold for the moment, as the club seemingly prefers to invest any available funds into their training facilities and youth academy. 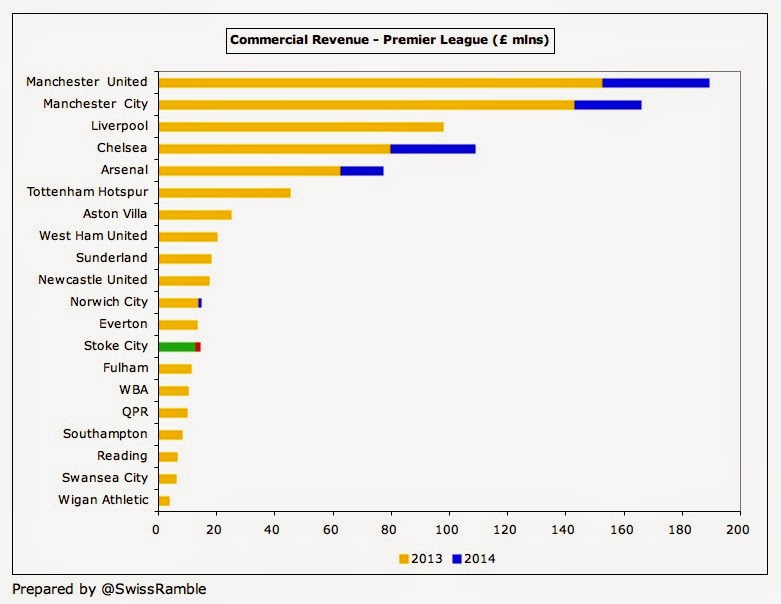 Commercial income rose 12% (£1.6 million) to £14.4 million, largely due to sponsorship and advertising revenue increasing by 25% (£1.5 million) from £6.2 million to £7.7 million. The other streams were relatively flat: conferencing and hospitality £3.4 million, retail and merchandising £2.1 million and other operating income £1.3 million.

Again, Stoke’s commercial income of £14 million is dwarfed by the leading clubs, e.g. the two Manchester clubs significantly grew their commercial revenue again in 2013/14: United to £189 million and City to £166 million. 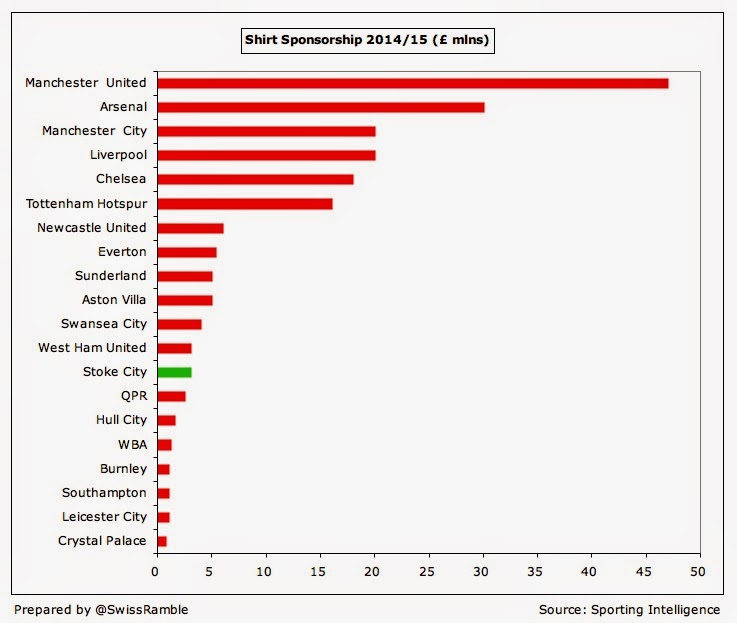 Stoke’s current shirt sponsorship with (you guessed it) bet365 is worth £3 million a season. This 3-year deal was signed in 2012, replacing the long-standing agreement with Britannia, who became Stoke’s official banking and community partner while also retaining naming rights for the stadium. Of course, this deal is a long way behind the “big boys”: United – Chevrolet £47 million, Arsenal – Emirates £30 million, City – Etihad Airways £20 million, Liverpool – Standard Chartered £20 million.

From the 2014/15 season Stoke’s kit deal is with Warrior, the US manufacturer most closely associated with Liverpool, who have succeeded Adidas. 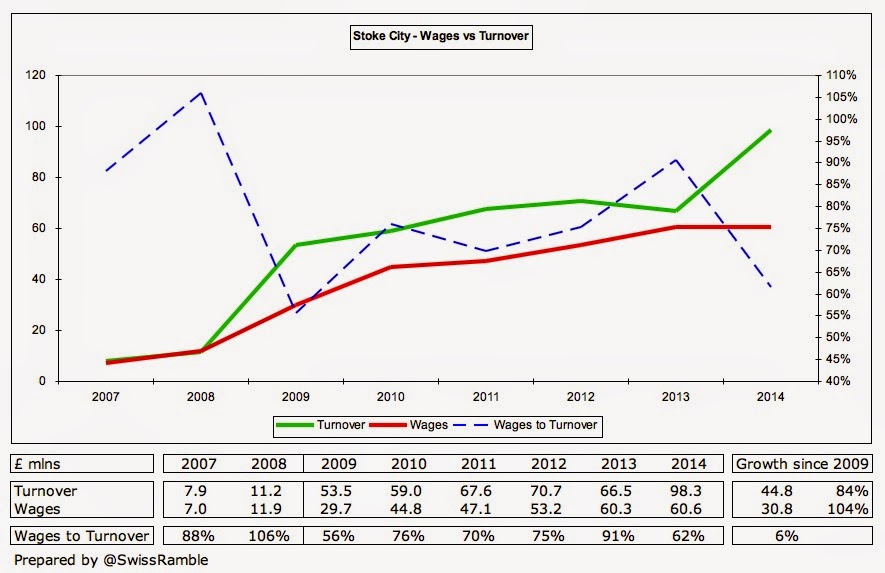 The wage bill appears to be virtually unchanged, rising just 0.4% from £60.3 million to £60.6 million, though it is possible that the previous season’s figure includes the £2.85 million paid to Tony Pulis and his coaching team following their departure (the club only said that it was included in “operating expenses”).

Either way, Stoke’s wages to turnover ratio has improved from 91% to 62%, thanks to the significant revenue growth. This is the lowest since the 56% reported in 2008/09, the first season back in the Premier League. 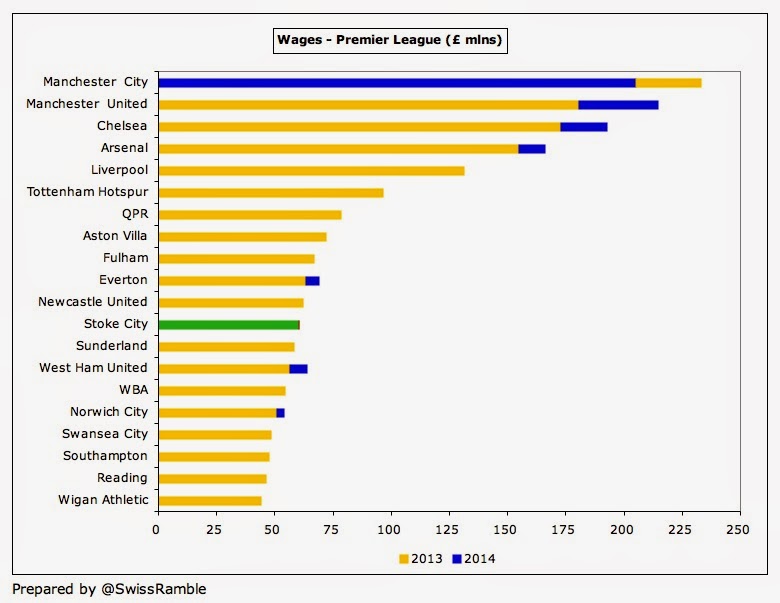 Stoke have generally performed to expectations based on their wage bill. For example in 2012/13 they had the 12th highest wage bill and finished 13th. Once all the 2013/14 accounts are published, it is likely that they will be seen to have outperformed last season by finishing 9th, given that there is normally a very close correlation between wages and success on the pitch. For example, the top four wage bills in 2013/14 were Manchester United £215 million, Manchester City £205 million, Chelsea £193 million and Arsenal £166 million.

Although it is clearly a major challenge for Stoke to compete on wages, Chairman Peter Coates is very aware of its importance, being quoted in one set of accounts thus: “The football club's main risks and uncertainties centre around the ability to train, acquire and develop players to sufficient standard to retain and improve its position in the Premier League.” In simple terms, that is only possible by paying players a decent salary to attract them to the Brittania. 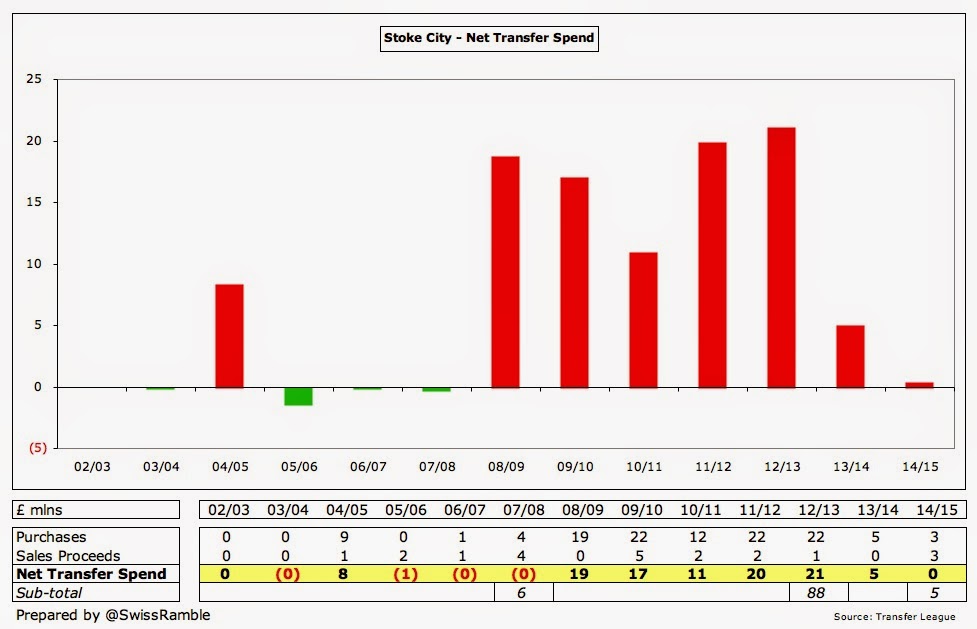 Since Stoke’s return to the Premier League they have invested heavily in player recruitment. In just five years between 2008/09 and 2012/13 they had a net spend of £88 million, as they built a competitive squad, splashing out on the likes of Peter Crouch, Kenwyne Jones, Wilson Palacios and Cameron Jerome. 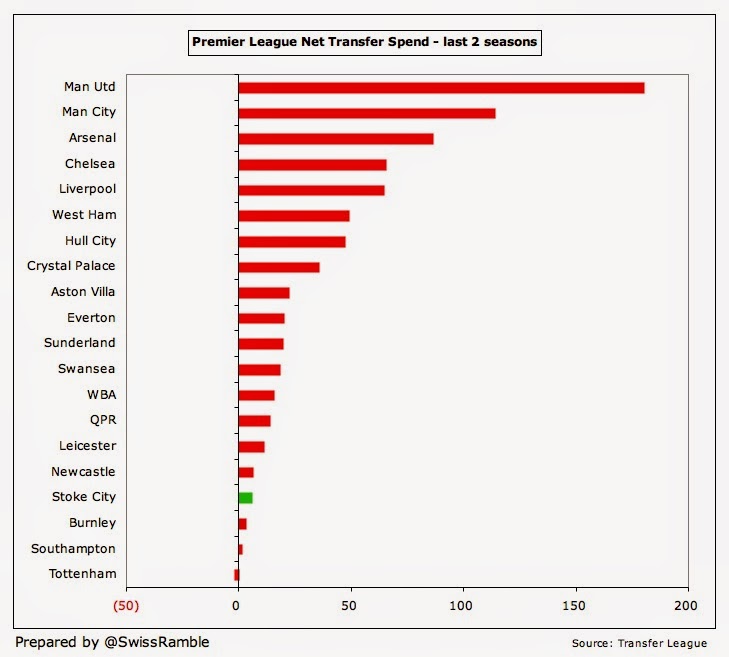 However, they have not been so expansive in the last two seasons, making a number of free transfer signings (Phil Bardsley, Steve Sidwell, Mame Biram Diouf, Stephen Ireland and Marc Muniesa), resulting in a net transfer spend of just £5 million. This is lower than all but three Premier League clubs: Burnley, Southampton and Tottenham – and the last two clubs’ figures are a little misleading, as they are only so low due to hefty player sales, which have then funded numerous acquisitions.

The modified change in approach towards player signings is reflected in player amortisation (the annual cost of writing-down transfer fees), which rose significantly from £0.3 million in 2005 to peak at £22.2 million in 2013, before falling back to £16.3 million last season. 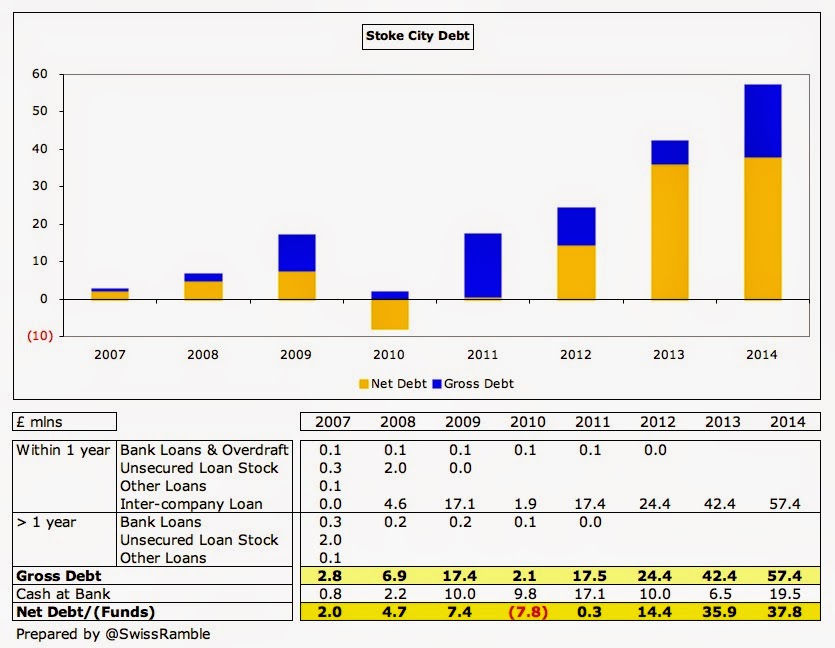 Although net debt only increased by £2 million from £36 million to £38 million, this was largely due to cash balances rising £13 million from £7 million to £20 million, and gross debt was actually up £15 million from £42 million to £57 million. The good news is that this is all owned to Stoke City Holdings Ltd, which is ultimately owned by bet365 (under the control of the Coates family). In other words, Stoke City have no external debt with banks, but an “in house” debt to their owners in the form of interest-free loans with no fixed repayment term.

The accounts highlight the importance of bet365’s ongoing investment and support. Although cash flow from operating activities is positive, the money required to fund investment in players has only been covered by frequent loans from the owners. In fact, since bet365 took control in May 2006, they have put in nearly £100 million (£95 million of loans and £2 million of share capital). 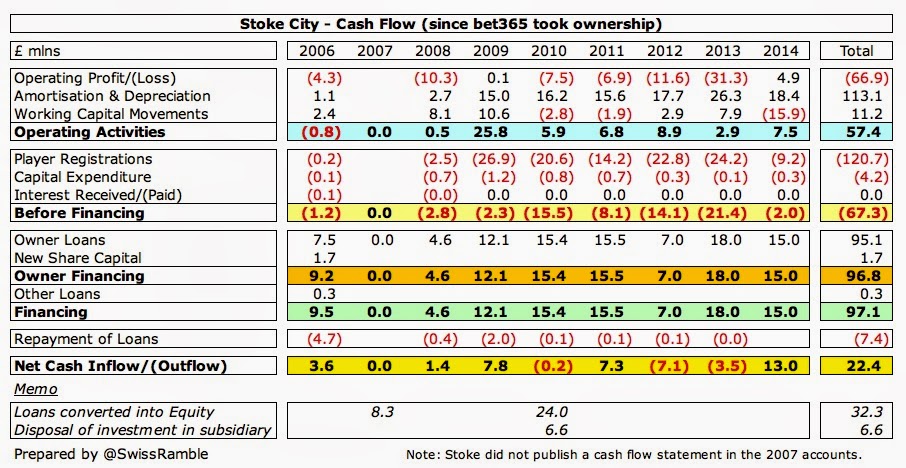 Although the Coates family might be keen to reduce their (financial) support, up to now they have still needed to sign some big cheques, advancing additional loans of £33 million in the last two seasons alone (£15 million in 2013/14 and £18 million  in 2012/13). Not only have they provided this funding, but they have also written-off £32 million of it by converting some of the loans to equity. In fairness, they can probably afford it, as the Sunday Times Rich List revealed that they had become the UK’s first betting billionaires.

However, the additional money from the 2013/14 Premier League TV deal, together with the adoption of the new Premier League financial fair play rules, which essentially prevent most of that higher revenue being used to increase wages (as has traditionally happened with previous TV deals), means that Stoke’s business model may well change to self-sufficiency.

Of course, this will only be the case if Stoke manage to extend their stay in the lucrative Premier League. There are encouraging signs that Mark Hughes’ team is more than capable of doing this, but the reality is that it will be even more of a dog fight in the bottom half of the table in future, as many clubs will do their utmost to stay at the top table for the very same reasons.
Posted by The Swiss Rambler at 7:22 AM