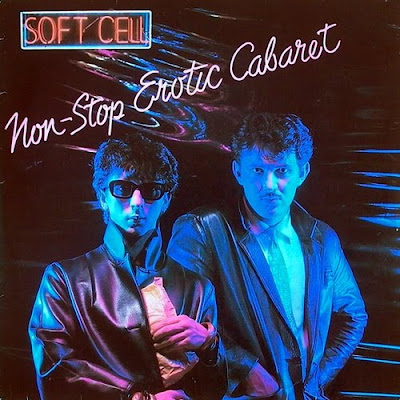 Soft Cell were a sleazy new romantic band that walked on the wild side. As synthesizer music took hold, they dared to be different, making innovative electronic music that sounded edgy and a little threatening, as they took us on a journey into a neon-lit world of seedy back alleys and squalid encounters. Tapping into an underground sub-culture of voyeurism and sexual deviancy not previously explored in mainstream pop music, they celebrated decadence and hacked away at the respectability of 80s Britain. “Non-Stop Erotic Cabaret” fully reflected this hedonistic atmosphere with Almond’s lyrics drawing on the darker side of his imagination to create a virtual red light district on vinyl. As the singer once said, “We sing about boy meets girl and lures her into a life of drugs and prostitution”. 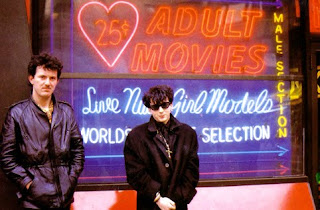 Marc Almond was a proper pop star: famous for his flamboyant, unabashed homosexuality, he had the attitude, the mascara, the tears and the heartbreak. His passionate, plaintive vocals were dramatic (even melodramatic), as he sang about the vice world in a frank, confessional way, as if he had personally lived every line. Although his own record company accused him of singing “out of tune”, the vulnerability in his voice hinted at the powerful emotions behind his trashy tales of cheap sex and desperate regret, despite all the camp cynicism. Listening to this album is like reading the most personal of diaries – and an extremely intimate one at that. Almond’s genius was to make the characters in his songs convincing, even as he acted the drama queen in bondage gear – naughty, but nice.

His fellow art school student, Dave Ball, provided the band’s unique synthesizer sound. Standing aloof behind his instruments like a twisted bouncer behind his impish, risqué friend, he created the music with the minimum of kit in line with their low-rent aura, using only a Synclavier (the first commercially available digital synth), a bass keyboard and the Roland drum machine that supplied the distinctive 80s beat. As a short, energetic front man sang his theatrical lyrics in front of a taciturn keyboard player, you could be forgiven that Sparks had been given a salacious makeover, but in truth Soft Cell were influenced just as much by the idiosyncratic synth pioneers Suicide. 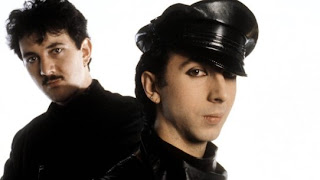 One of the strengths of Soft Cell’s music was its simplicity, with Ball’s synthesized effects providing a meaty beat for Almond’s wordy vocals in his titillating tales. While their approach was undoubtedly straightforward, the music was fresh and full of life, as the band was evidently energised by making the record in New York, where they grabbed every possibility available. Their voluptuous backing singer Cindy Ecstasy reputedly introduced them to the drug of the same name during the recording process. Their formula was to take classic R&B rhythms and blend these with the icy synthesizer riffs so popular at the time – Northern Soul awash with keyboards. The infectious, inventive beats married with memorable melodies to provide the epic sound required by Almond’s kitchen sink dramas.

Of course, Soft Cell are best known for “Tainted Love”, their enormously catchy cover of a soul classic first sung by Marc Bolan’s wife Gloria Jones. Their darkly subversive version was a massive worldwide hit, completely eclipsing the original, but its overwhelming ubiquity cast a long shadow, as many people only know the group for this dance floor favourite: “Once I ran to you (I ran)/Now I'll run from you/This tainted love you've given/I give you all a boy could give/You take my tears and that's not nearly all/Oh … tainted love”. Although it’s become an iconic pop classic, it still sounds great, even though most listeners miss the more sinister, obsessive aspects of the song that hint at the yearnings displayed on the other album tracks. 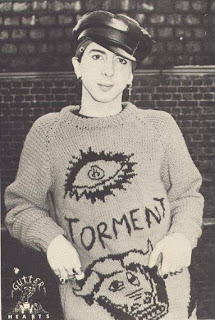 A recurring theme of Soft Cell’s records was looking for new experiences, striving for new beginnings to escape their mundane existence. Their dissatisfaction with the boredom and hypocrisy of suburban life was clear in the album’s frenetic first track “Frustration”. The desire to break-out and have fun is encapsulated in Almond’s opening line, when he screams, “Fr ...fr ... fr ... frustration!”, but he really captures the ennui of his day-to-day existence, “I have life/Ordinary wife/I have car/A favourite bar/I have job/A moderate wage/I get the pains/That come with age/I am so ordinary”.

So it should come as no surprise that he’s searching for more exotic activities, which take him into the shabby world of strip clubs and sex cinemas. The album’s sexual motif is clear from the explicit “Seedy Films” and “Sex Dwarf”, which made Frankie Goes to Hollywood’s “Relax” seem like wholesome entertainment in comparison. The theme is unapologetically in your face from the get-go and it doesn’t care if it shocks or offends. 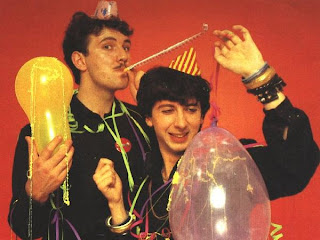 "Boys just want to have fun"

The gorgeously suggestive, slow-paced “Seedy Films” could not be smuttier, “Sleazy city/Sleepy people/Down in your alleys/Seems that anything goes/Blue films flicker/Hands of a stranger/Getting to know you/And I'm getting to like you”. To a chorus of dirty giggles and breathless female vocals, Almond is in his element as he sings, “Phone me tonight/And maybe we can talk dirty”, accompanied by the haunting clarinet that would be used to great effect on a later single, the majestic “Torch”.

Even more controversial is the outrageously kinky “Sex Dwarf”, which almost sounds like a manifesto for perverted pleasure, “Isn't it nice/Sugar and spice/Luring disco dollies/To a life of vice”. It’s completely over the top, hopefully ironic with its creepy whispered repetition of the title and sounds of a woman gasping from a cracked whip, but it’s also without doubt an extraordinary song that is guaranteed to fill the dance floor. 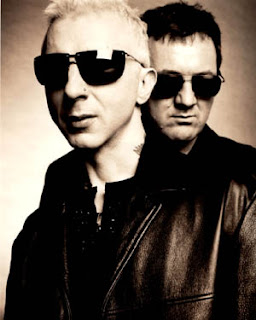 "Not how I remember Blondie"

These darker urges are further explored in “Secret Life”, which recounts the story of a married celebrity, desperate to keep his sordid secrets hidden from exposure, “In your little black book/You've got the names/And the favourite persuasions/Of the people in the headlines/I'm in there under A/And I'm rated under B/You've got photographs to prove it/And I swear to God it's not me”. Ball’s hypnotic dance beats, combined with a cold electronic soundscape, offer the perfect musical backing to Almond’s account of his depravity, which is sung with a beguiling mix of guilt and gratitude.

In fact, Almond often portrays hedonism as pleasurable but melancholy. All the new sensations are indeed thrilling and exhilarating, but the experience is not necessarily all that he had hoped for. “Bedsitter” represents the bitter hangover after the fleeting enjoyment of last night’s party in a song that simply cries out with loneliness and despair, “Sunday morning going slow/I'm talking to the radio/Clothes and records on the floor/The memories of the night before/Out in club land having fun/And now I'm hiding from the sun/Waiting for a visitor/Though no-one knows I'm here for sure”. Rarely has a song with such a beautiful melody described such a desolate existence. 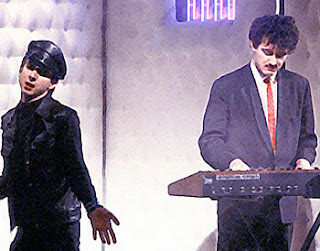 Similarly despondent, the magnificent anthem “Say Hello, Wave Goodbye” tells a story of doomed love. As beautiful as anything to have emerged from the world of electronica, Almond brings real feeling to the blatantly sentimental lyrics as he swings from resigned humour (“I tried to make it work/You in a cocktail skirt/And me in a suit/Well it just wasn't me”) to deep passion (“Take your hands off me/I don't belong to you, you see/ Take a look at my face/For the last time/I never knew you/You never knew me/Say hello, goodbye”). It’s a big, bold, lush production that, even today, raises the hairs on your arms. After listening to Almond’s Scott Walker impression here, nobody could say that synthesizer music lacked soul.

The whimsical “Youth” is even sadder, giving the perspective of a fading beauty, which was particularly important in the fashion conscious 80s and is still relevant today, “Youth has gone/I heard you say/It doesn't matter/Anyway/Don't hide the photos/Or turn off the lights/I'm quite sure we've both seen/Funnier sights”. Once again, it returns to Almond’s fear of ending up on his own. 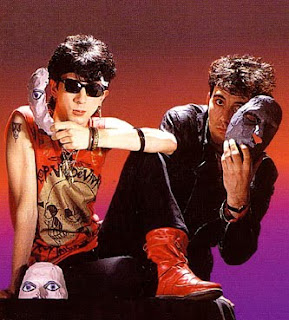 Looking at Almond’s lyrics, you would have to believe that he suffered greatly, even at the height of Soft Cell’s popularity. While lauding self-gratification, his songs threw into dramatic perspective the downside of club life and spoke of the futility of getting away from the humdrum. These themes recur throughout his musical career, though in Soft Cell he managed the difficult balance of drawing the listener into his depressed state, but also treating the subject lightly – largely thanks to the pop sounds coursing through his veins (along with many other substances, no doubt).

The lively “Chips On My Shoulder” was a bitchy attack on hypocrites (“I'll talk about famine/While cooking my dinner”) and complainers (“I'm making a stand/While I sit on my arse”). In the vaudeville “Entertain Me”, Almond waspishly berates his audience for never being satisfied, “Entertain me/I'm as blank as can be/And I've seen it before/And I've done it before/And I think that I like it/But no I don't like it”. 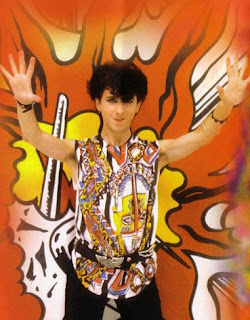 Soft Cell were never quite so much fun again. Following an album of remixes “Non-Stop Ecstatic Dancing” (great title remix), their later albums contained less sex, less humour and were considerably bleaker, as may be surmised from their names, the aptly titled “The Art of Falling Apart” and the prophetic “This Last Night in Sodom”. By 1983, the band had amicably dissolved leaving Marc to his Mambas, before reforming twenty years later to once again articulate a world of desperate disintegration and passionate pathos in “Cruelty Without Beauty”.

However, their music was undeniably influential with the likes of Culture Club, Duran Duran and even the Eurythmics all owing them a debt. You could argue that some groups stole their formula lock, stock and barrel, as two-piece synth bands became all the rage. Yes, I am talking about you, Pet Shop Boys, Orchestral Manoeuvres in the Dark and (cough) Erasure. 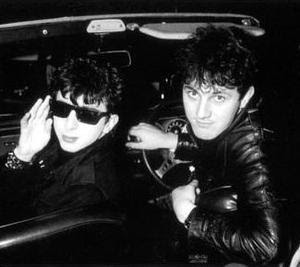 Soft Cell were without a doubt one of the most distinctive bands to come out of the vibrant 80s. They made sleaze glamorous and exciting, singing about subjects that most were afraid to acknowledge even existed. All about “Tainted Love”, but so much more than their famous single, they came with an X certificate – X for excellent.

Posted by The Swiss Rambler at 3:28 PM