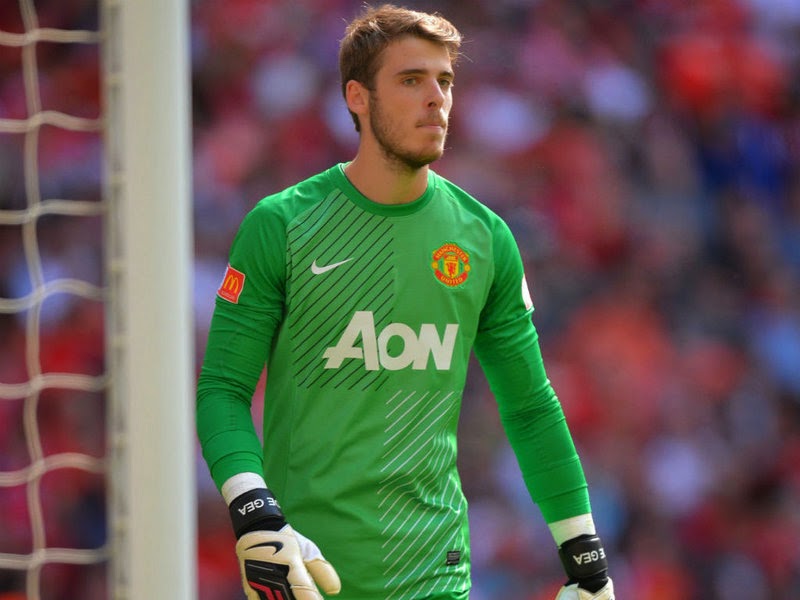 For Manchester United supporters the 2013/14 season is one best forgotten, as the transition from the legendary Sir Alex Ferguson to David Moyes proved to be every bit as difficult as many of them had feared. The team dropped to a relatively low 7th place in the Premier League, which was not only the first time United had finished outside the top two positions since 2005, but also meant that they failed to qualify for Europe – almost unthinkable for a club of this stature. 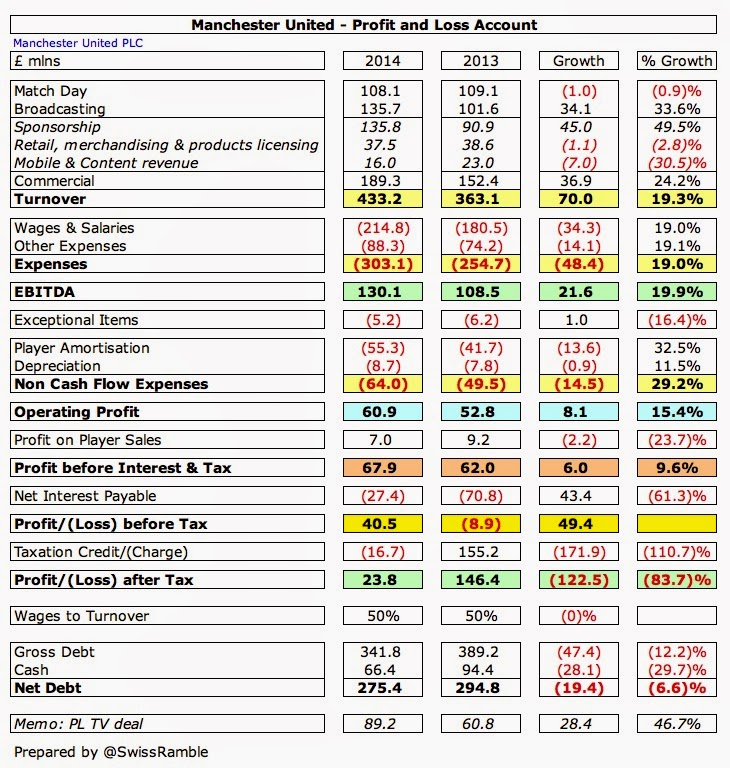 However, this did not stop United reporting a fantastic set of financial results with revenues up 19% (£70 million) to a record high of £433 million and EBITDA (Earnings Before Interest, Taxation, Depreciation and Amortisation) up 20% (£22 million) to £130 million. Mainly as a result of this impressive growth and vastly reduced interest payments, which were down 61% (£43 million), last season’s loss before tax of £9 million improved to a healthy profit of £41 million.

Profit after tax did fall from £146 million to £24 million, as 2012/13 benefited from a £155 million credit, largely due to the recognition of US deferred tax assets, which was a special once-off case.

Exceptional Items were £5m, almost entirely due to the compensation paid to Moyes and his coaching staff when they were shown the door. The previous year’s £6 million also included £2 million for coaching staff leaving as a result of Ferguson’s retirement plus £4 million professional advisory fees in connection with the IPO (Initial Public Offering). 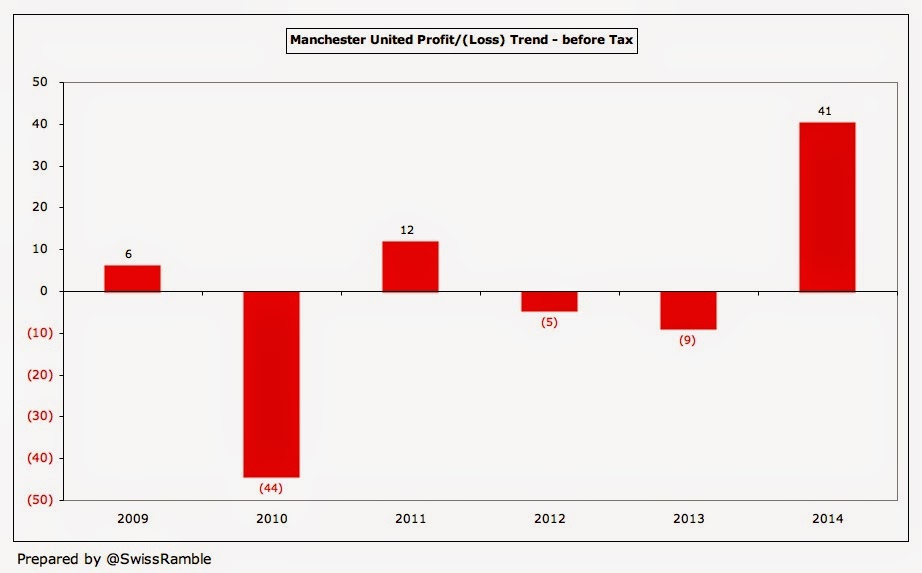 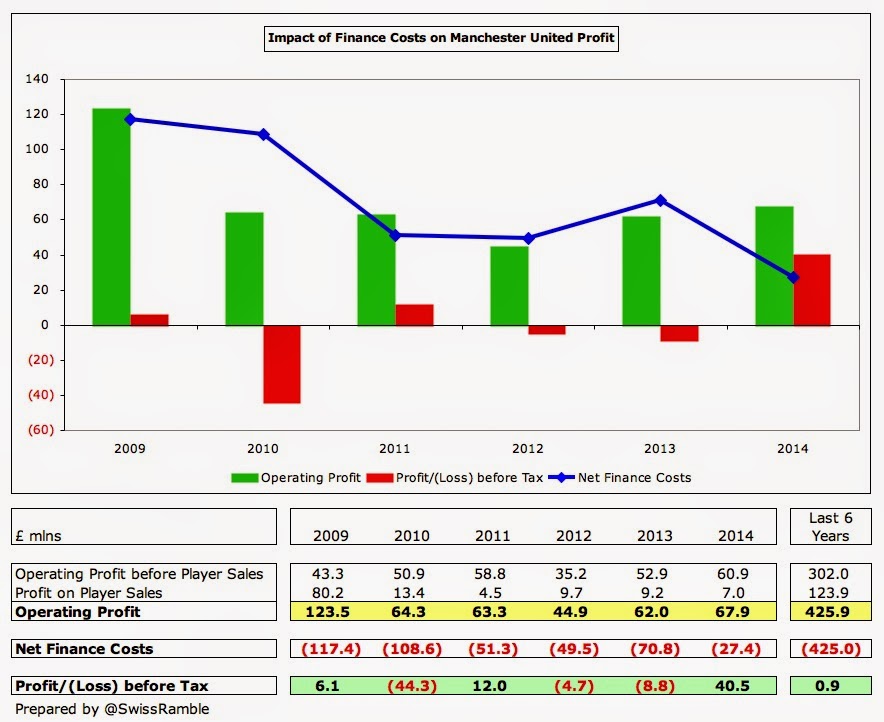 Of course, the profits would have been substantially higher if the club did not have to bear the financing costs of the Glazers’ leveraged buy-out. In fact, over the last six years United have made total operating profits of £426 million, which has been almost totally wiped out by net financing costs of £425 million.

The good news for the club is that these costs have fallen from £117 million in 2009 to “only” £27 million in 2014. This season alone these costs were cut by £43 million from £70 million, primarily due to a £32 million reduction in premium paid as a result of the repurchases of senior secured notes and £13 million reduction in interest payable following another refinancing in 2013. 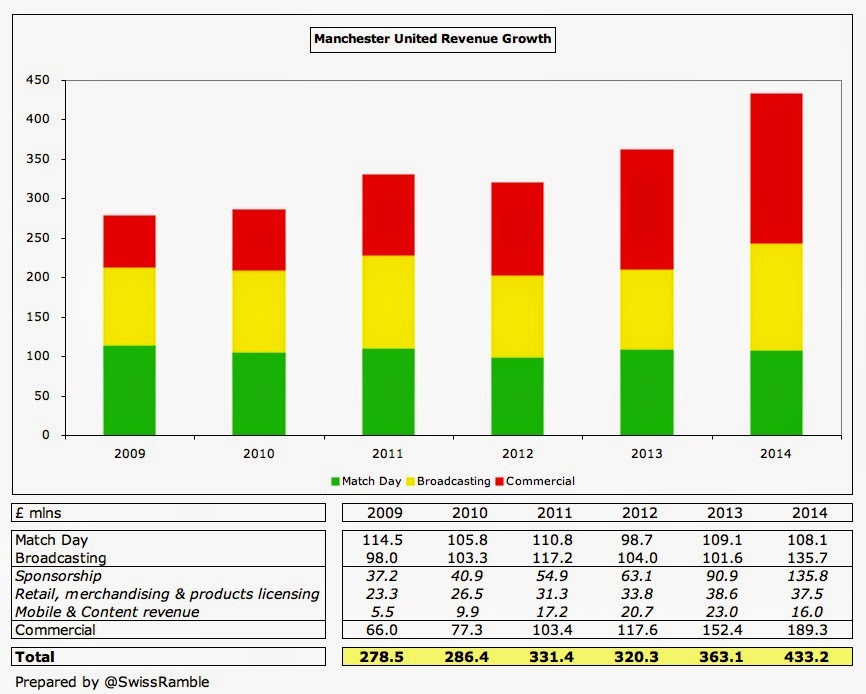 The 49% growth in sponsorship revenue (£45 million) to £136 million was particularly striking, due to several new sponsorships, higher renewals and a significant increase from the pre-season tour and promotional games (which brought in £11 million in 2014).

Retail, merchandising and product licensing revenue decreased £1 million to £38 million, primarily due to lower money from the Nike agreement, while mobile and content revenue dropped by £7 million to £16 million, due to the expiration of a few mobile partnerships. 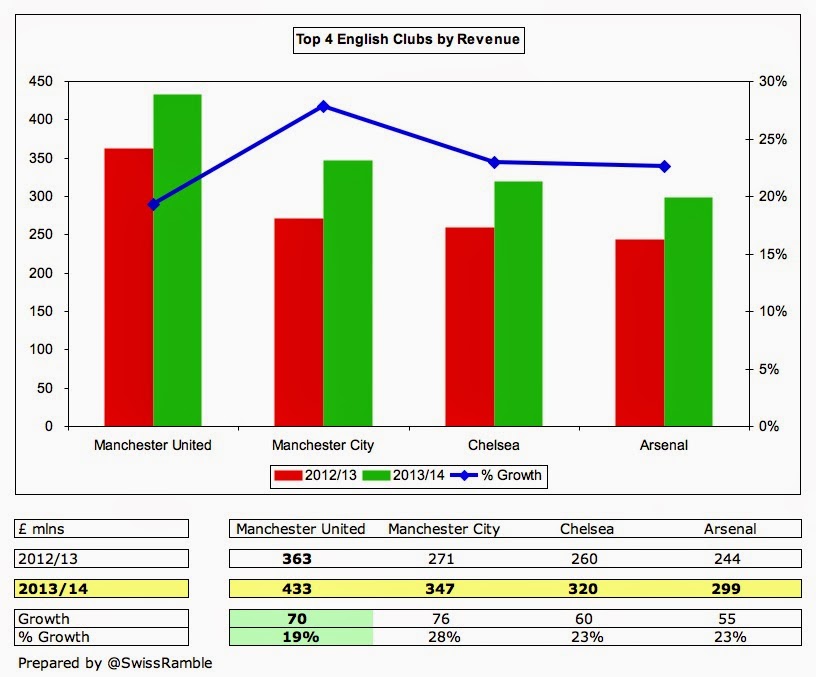 Unsurprisingly, United’s revenue of £433 million is by far the highest in England, around £86 million more than their neighbours Manchester City, followed by Chelsea £320 million and Arsenal £299 million. However, their growth rate is lower than the others at 19% (albeit from a higher base) with City growing by 28%, and Chelsea and Arsenal both by 23%. 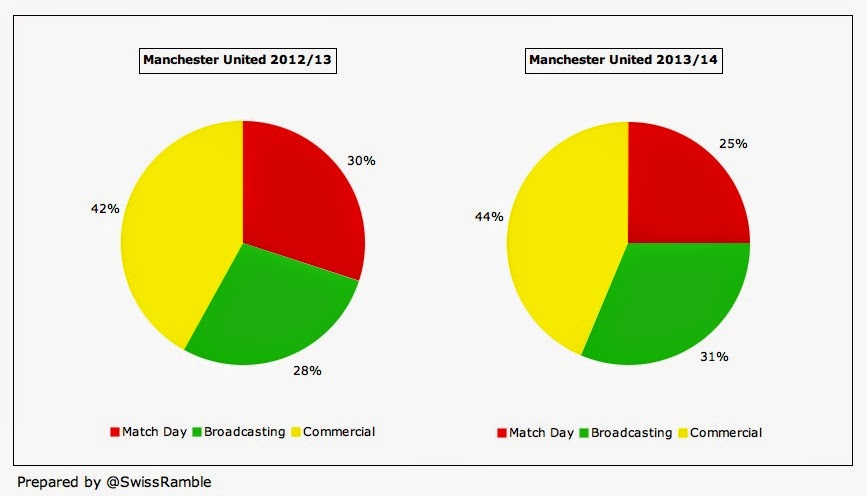 United’s revenue mix is probably the envy of many other clubs, as it is a relatively even split, compared to those who have an unhealthy reliance on TV money. That said, commercial is now up to 44%, while broadcasting is also higher at 31%, leaving match day at 25%. 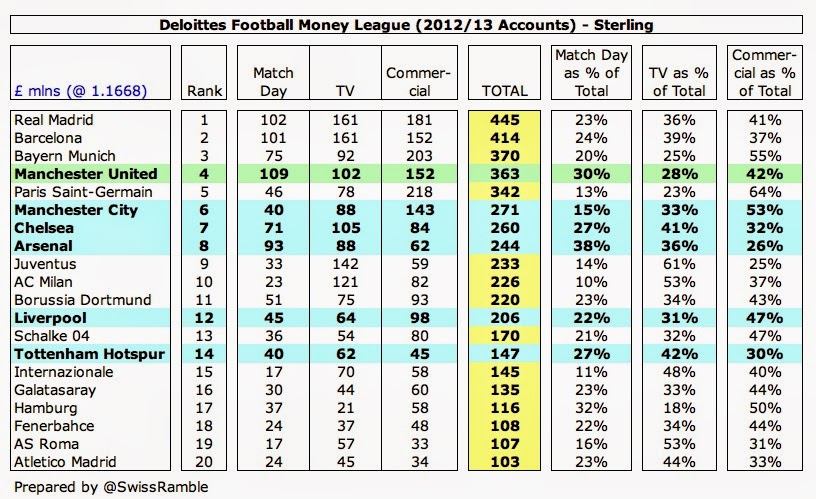 In 2012/13, the last season where all clubs have reported, United had the 4th highest revenue in the world with £363 million, but were a long way off top spot, being £82 million behind Real Madrid's £445 million. 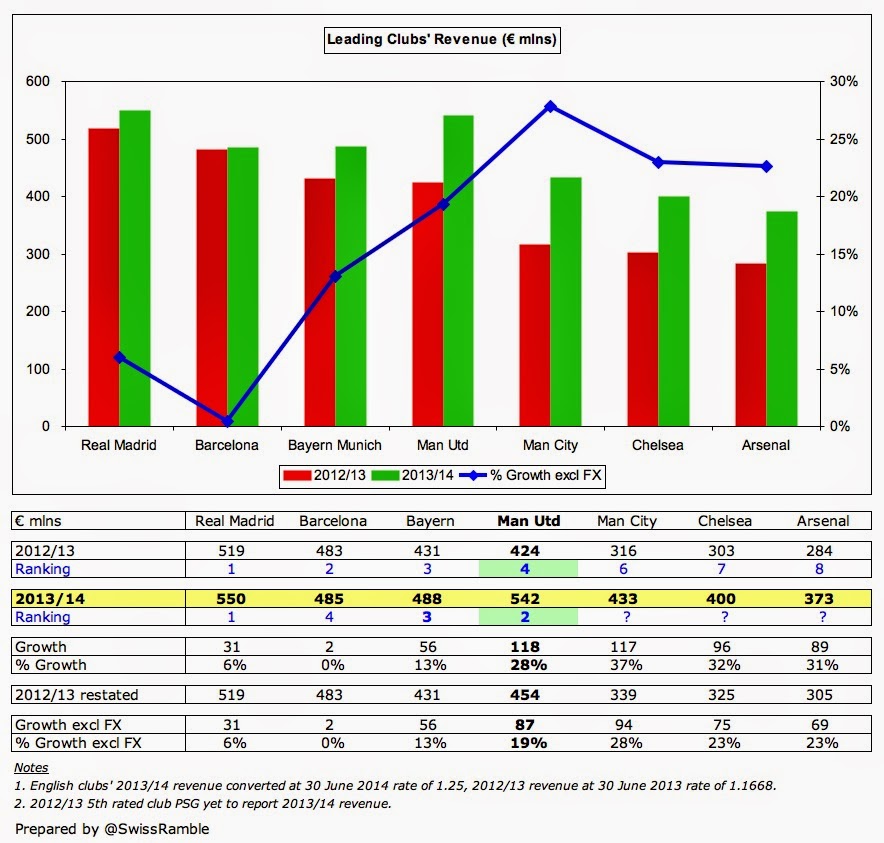 However, their growth this season plus a more favourable exchange rate means that they are likely to be only just below Madrid in the next Deloitte Money League. In 2012/13 Deloitte used the 30 June 2013 rate of 1.1668, so they will almost certainly use the 30 June 2014 rate of 1.25 for the next edition. This means that United’s revenue of £433 million will be €542 million, very nearly the same as Madrid’s €550 million (excluding player sales), and overtaking Bayern Munich €488 million and Barcelona €485 million. 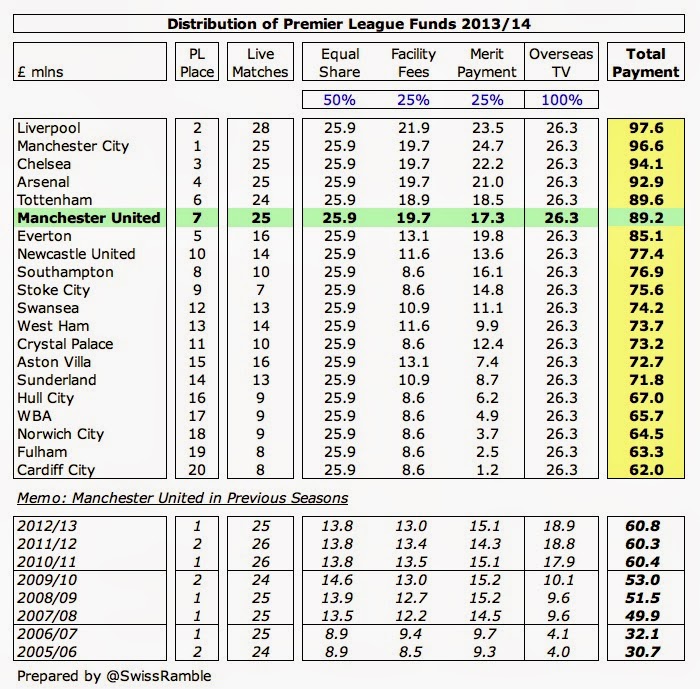 One of the main drivers for the English clubs’ high revenue growth is the new Premier League TV deal, which commenced in the 2013/14 season. In United’s case, their share of the Premier League pie increased 47% (£28 million) from £61 million to £89 million. 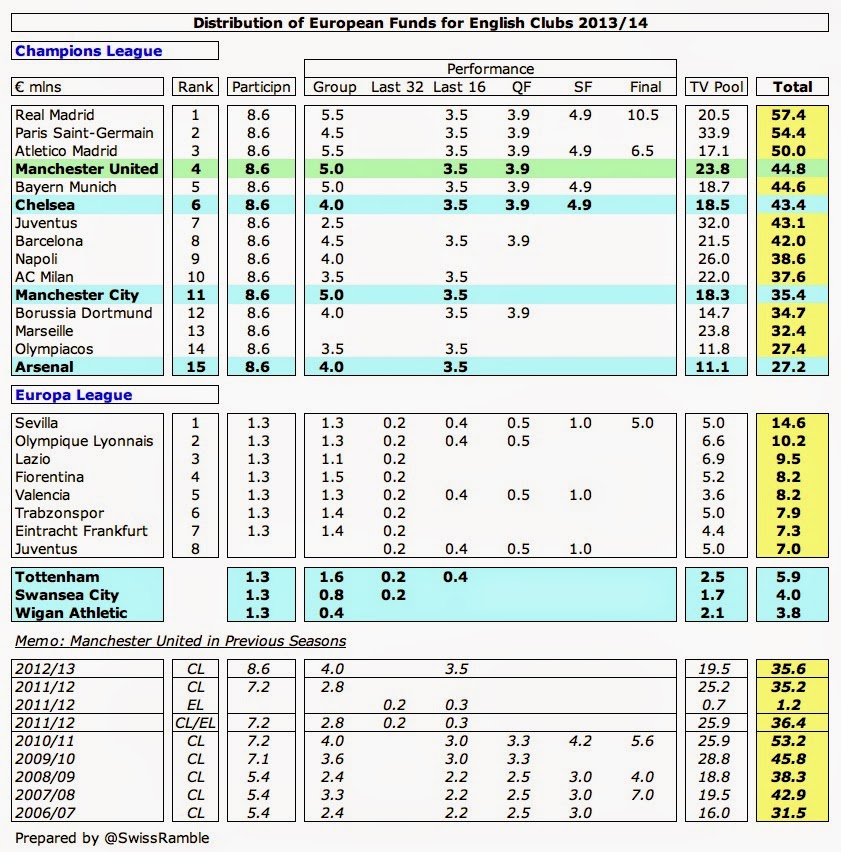 The other main element of broadcasting revenue is the Champions League, which increased £8 million from £31 million (€36 million) to £39 million (€45 million), due to progressing to the quarter-final stage compared to the last 16 in the prior year and receiving a larger share of the UK market pool due to better 2014 Champions League progress and finishing 1st in the Premier League in the 2012/13 season compared to 2nd in 2011/12. United will obviously lose this revenue in 2014/15 season following their failure to qualify for Europe’s flagship competition. 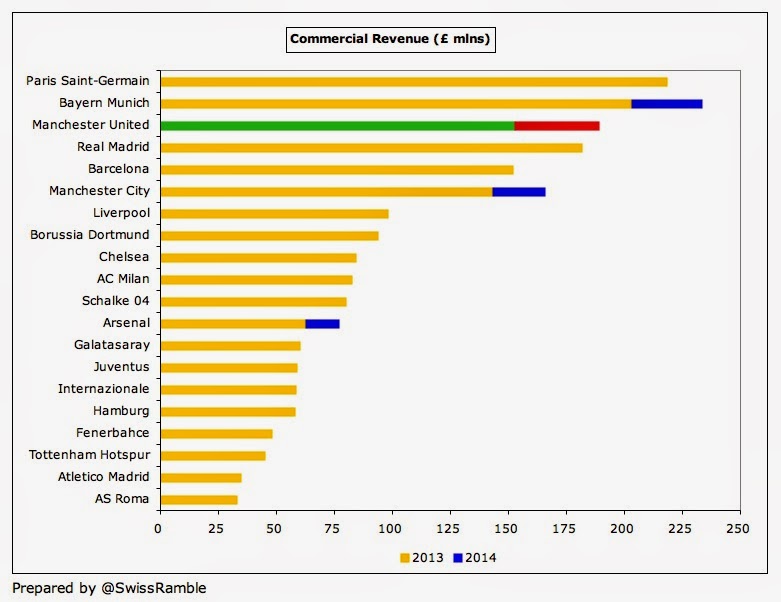 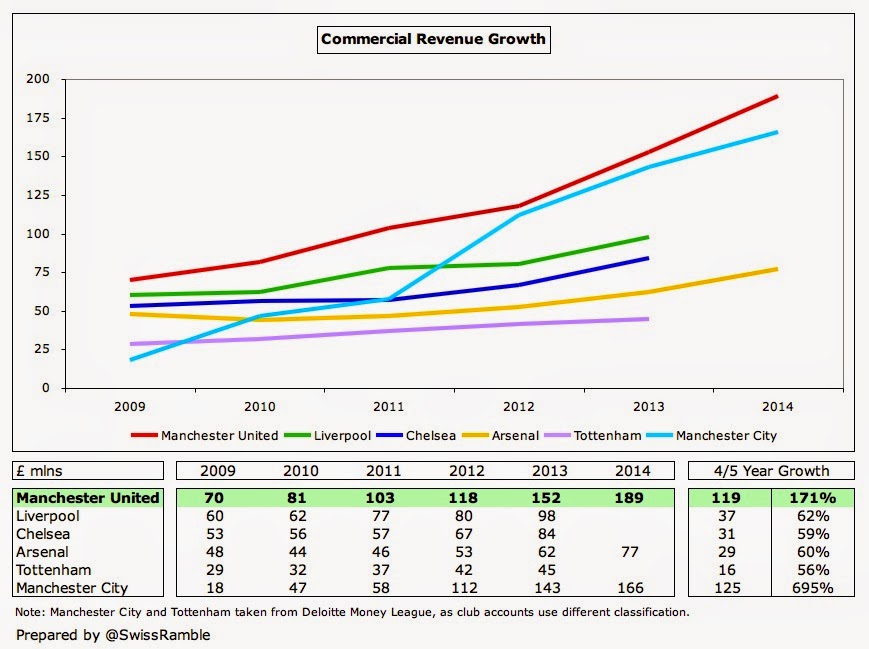 However, United are re-establishing their dominance of the commercial scene in England, as they are increasing the gap to their nearest challengers, Manchester City, who are £23 million lower at £166 million. Both Manchester clubs are miles ahead of the other English clubs with the next highest Liverpool at £98 million (though in fairness this is the 2012/13 figure). And remember, this is before United’s new deals with Chevrolet and Adidas kick in.

United’s ability to extract value from their shirt sponsorship is almost unprecedented. Aon have been paying an average of £20 million in the last four years, but this will rise to an incredible £46 million a year when Chevrolet take over the sponsorship from the 2014/15 season. The new deal runs to the end of the 2020/21 season and is worth $70 million in the first season, rising by an additional 2.1% each season afterwards. Amazingly, Chevrolet also paid United $18.6 million in each of the 2012/13 and 2013/14 seasons for “pre-sponsorship support and exposure”. 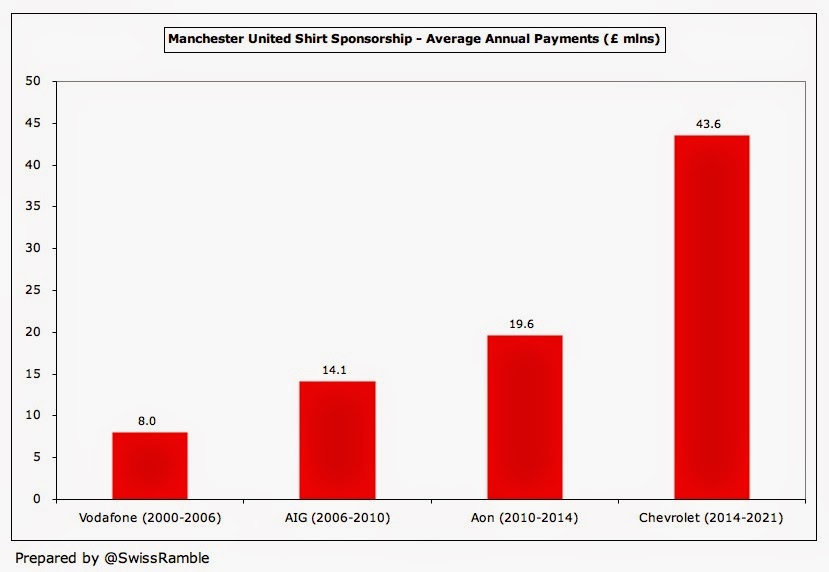 Aon have not completely exited the scene though, as they will pay for the privilege of being United’s training kit partner until 2020/21 including renaming the training facilities at Carrington as the Aon Training Complex.

On top of that, United continue to announce new sponsorships. In 2013/14 alone this included 3 global sponsors, 9 regional sponsors and 8 financial services and telecom partnerships.

Furthermore, United have also signed the “largest kit manufacture sponsorship deal in sport” with Adidas, which is worth £750 million over 10 years or an average of £75 million a year from the 2015/16 season. This is, deep breath, £50 million higher than the current Nike deal – every year. It is true that success clauses are built into this contract, e.g. if United fail to participate in the Champions League for two or more consecutive seasons starting with the 2015/16 season, then the payment for that year would reduce up to 30%, but it is still an astonishing deal.

In addition, retail, e-commerce and licensing will revert to United from August 2015, as opposed to the current deal whereby any profits generated from these activities is shared equally between the club and Nike. 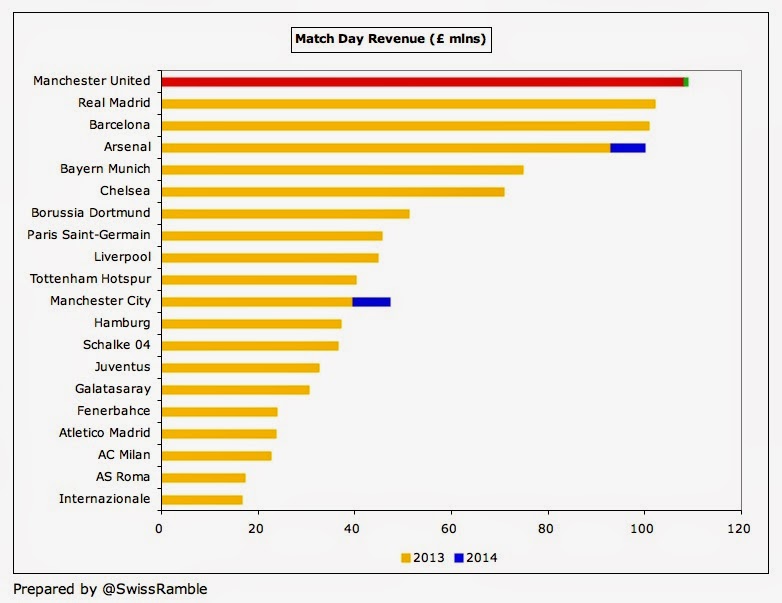 United’s match day revenue fell slightly to £108 million, due to hosting some games for the London Olympics the prior year, though this may well still be the highest in world football, as it was in 2012/13. United emphasise premium seating and hospitality facilities in order to maximise match day revenue, as can be seen by Old Trafford having 154 luxury boxes, approximately 8,000 executive club seats, 15 restaurants and 4 sports bars. In fact, the 2014 revenue included £54 million from gate receipts and £33 million from hospitality. However, the match day revenue stream will also fall in 2014/15, as no European games will be hosted at Old Trafford. 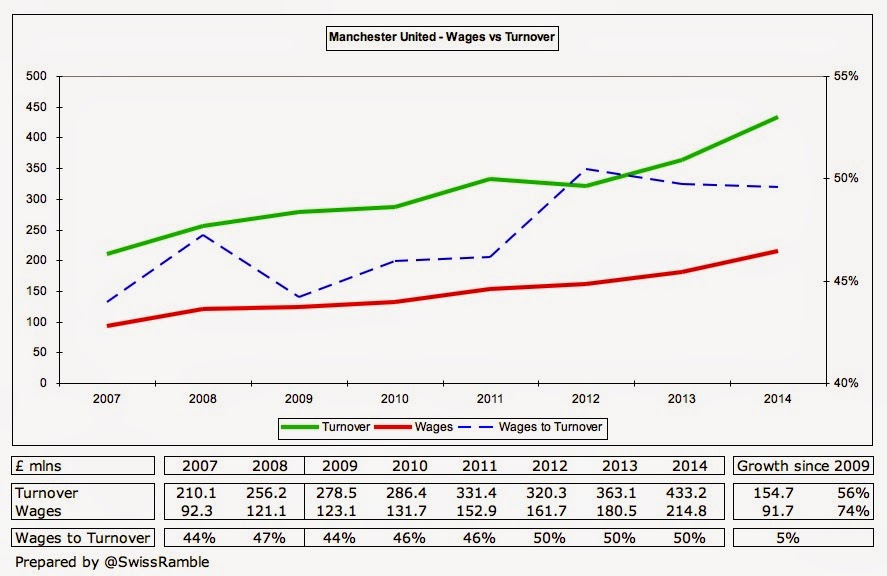 In line with revenue, United’s wage bill rose 19% (£34 million) to £215 million, due to player purchases and renegotiated player contracts, which maintained the wages to turnover ratio at the 50% level it has been for the last three seasons. 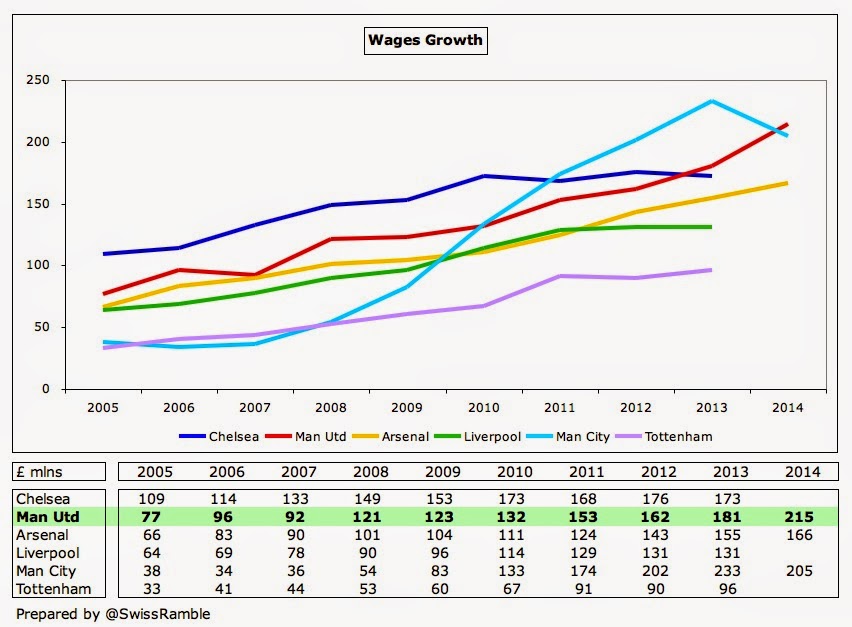 In 2014 United once again had the highest wage bill in English football, as Manchester City reduced theirs to £205 million. United were around £50 million higher than Arsenal, while Chelsea are still to report 2013/14 wages. 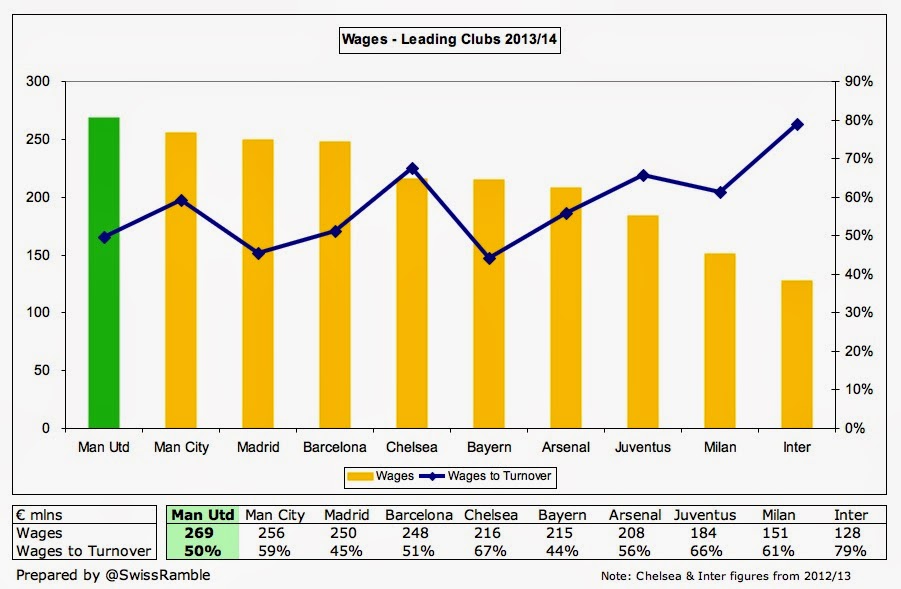 Interestingly, United now also have the highest wage bill in Europe with €269 million, having overtaken Real Madrid €250 million and Barcelona €248 million. Much of this is due to the exchange rate used (this calculation is based on the 1.25 rate that Deloitte are likely to use in their 2014 Money League) and it also depends on how clubs account for things like image rights, but it does give you pause for thought. 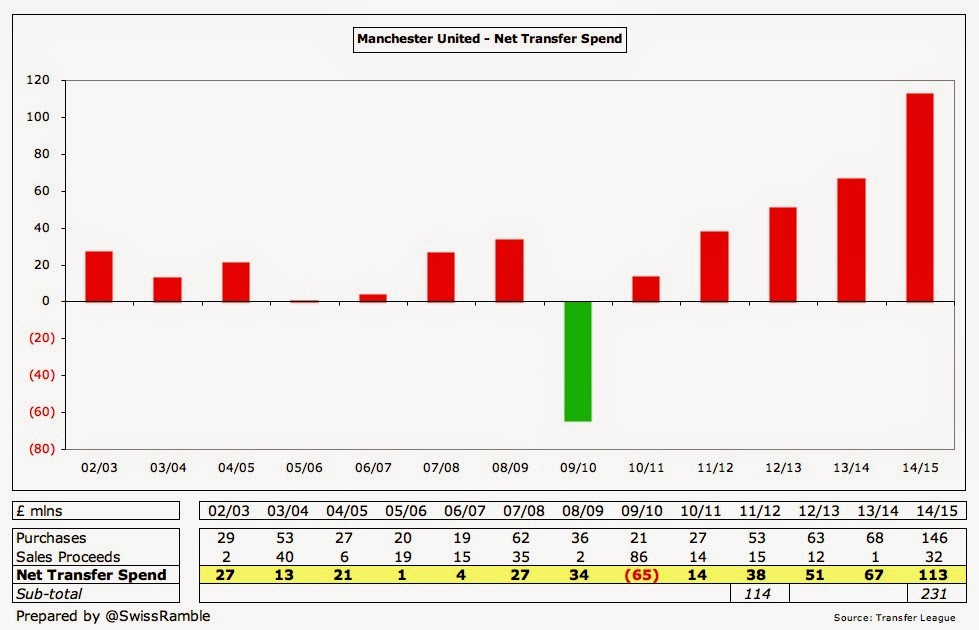 United’s cash machine has really swung into action in the last few seasons in the transfer market. Their net spend for the 10 years up to 2011/12 was only £114 million (obviously deflated due to Ronaldo’s £80 million sale to Real Madrid), but they have spent a net £231 million in the last three seasons, as Moyes and then van Gaal have recruited (expensive) new blood, including Juan Mata, Marouane Fellaini, Angel Di Maria, Ander Herrera, Luke Shaw, Marcos Rojo and Daley Blind.

As a result of this higher transfer activity, player amortisation (the annual cost of writing-off transfer fees) was up by nearly a third in 2014, increasing from £42 million to £55 million. 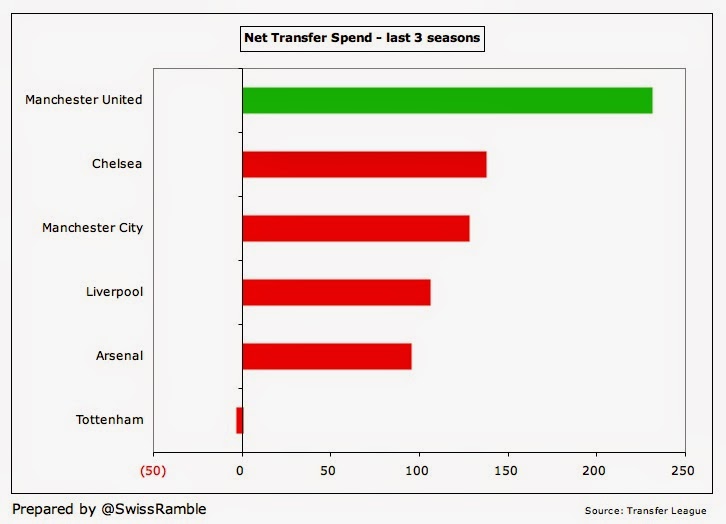 Their net spend of £231 million in the last three years is much higher than any other Premier League club, including previously big spending Chelsea £137 million and Manchester City £128 million, both of whom have been somewhat held back by FFP restrictions. 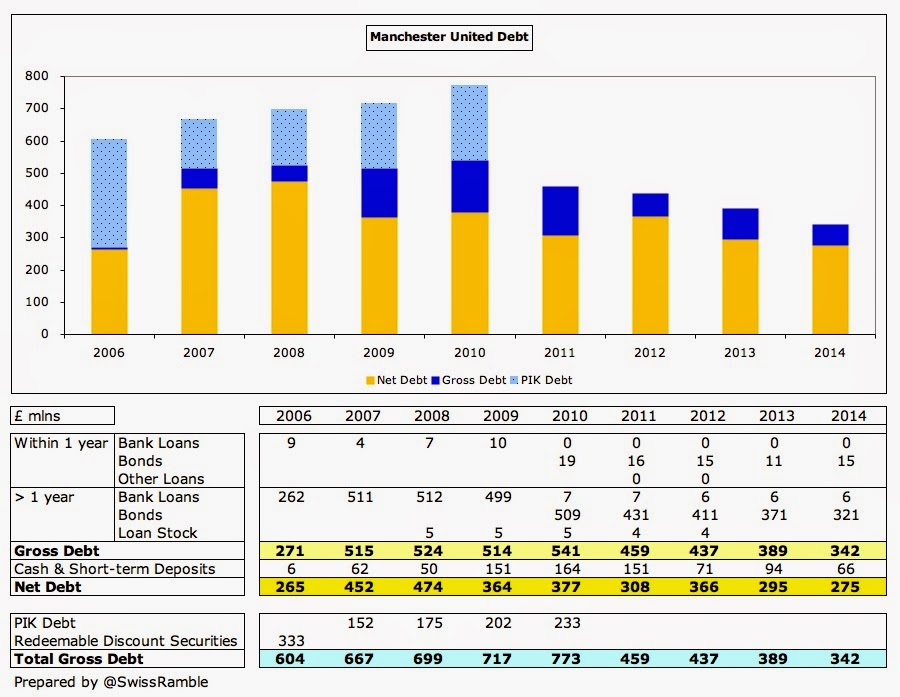 In September 2012 the net proceeds from the IPO were used to reduce the club’s indebtedness by repurchasing £63 million of the US Dollar senior secured notes, while a further £209 million of borrowings were refinanced (senior secured notes retired and replaced by a new secured term loan).

Overall, as good a performance off the pitch last season as it was bad on it for Manchester United. It is true that revenue will fall in 2014/15 as a result of no Champions League, with the club itself forecasting £385-395 million compared to £433 million this year, but if van Gaal can manage to lead United back into Europe, then the following year’s financials will look stellar with the new Chevrolet and Adidas deals both fully on board.
Posted by The Swiss Rambler at 9:35 AM