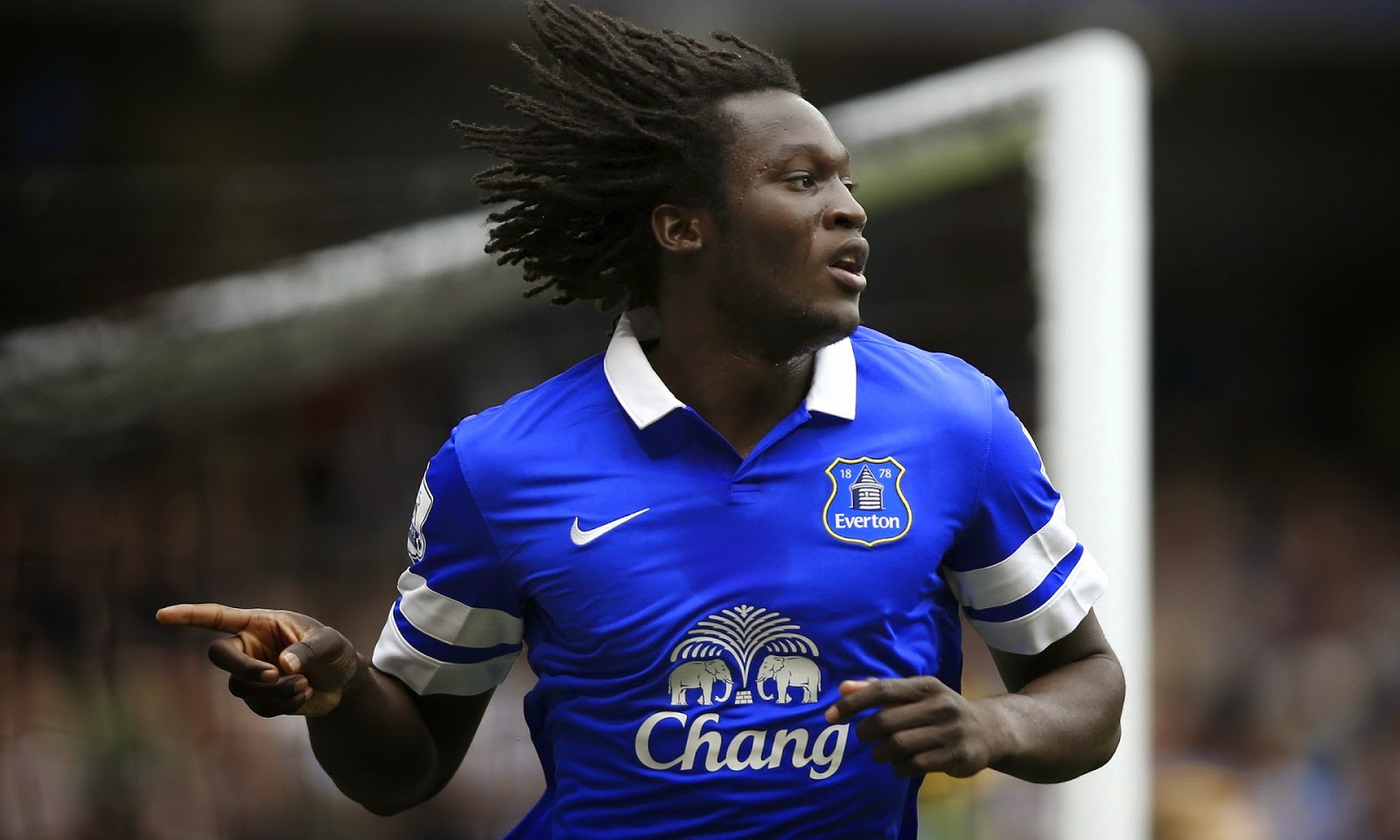 In his first season as Everton’s manager, Roberto Martinez delivered an excellent performance with his side finishing fifth in 2013/14 and therefore qualifying for the Europa League. The club fared no less well off the pitch, as Everton registered a record profit of £28 million on a record turnover of £121 million, which enabled them to significantly reduce their net debt from £45 million to £28 million. 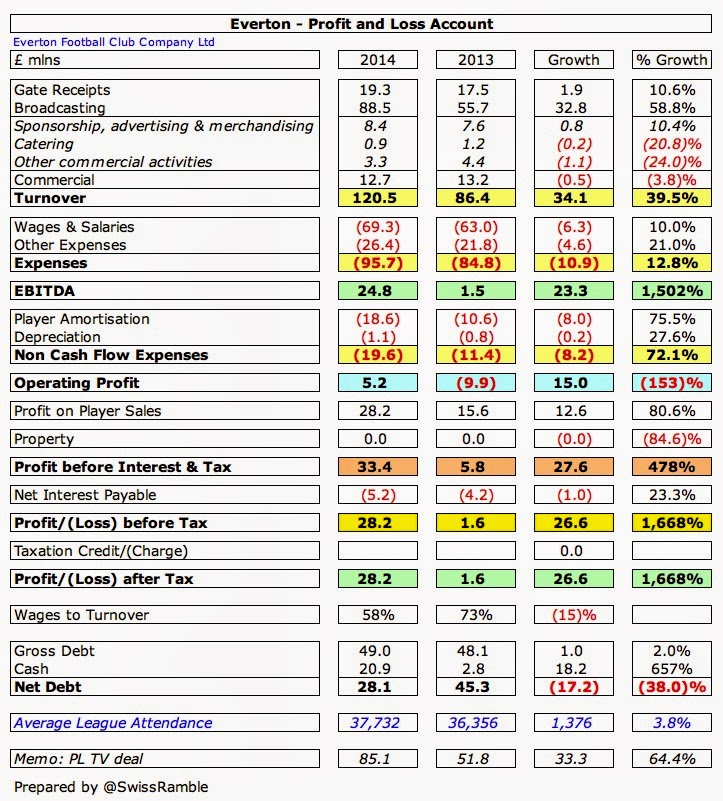 Profit increased by £26 million from £2 million to £28 million, mainly driven by more money from the new Premier League TV deal £33m and profit on player sales being up £13 million (Marouane Fellaini to Manchester United, Victor Anichebe to WBA and Nikica Jelavic to Hull). This was partly offset by growth in wages of £6 million, player amortisation £8 million and other expenses £5 million.

Even though Everton managed to make a small profit in 2012/13, this was largely due to profit from player sales, so they still recorded an operating loss of £10 million that year. However, what is particularly impressive about this season’s figures is that they have succeeded in turning that around, making an operating profit of £5 million even before player sales. 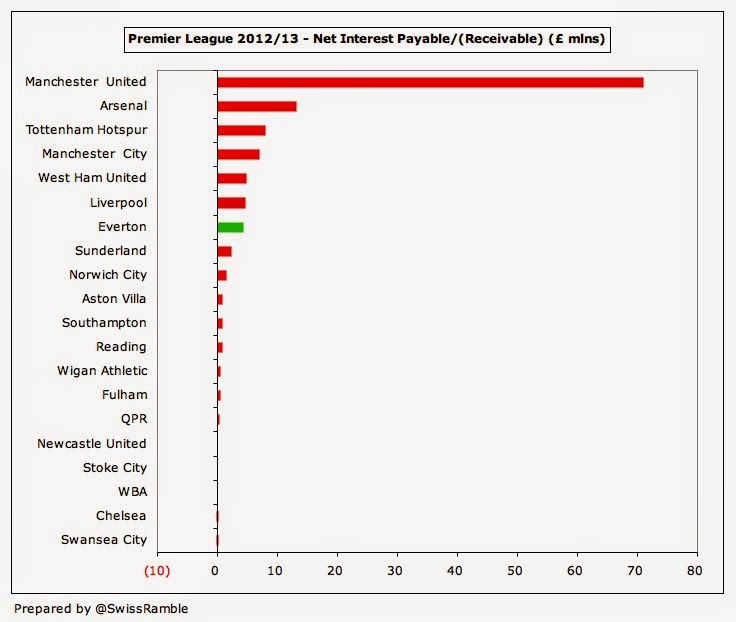 The £28 million profit would have been even better without £5 million of interest payable (up from £4 million the previous year) that was required to service the securitized debt and the bank overdraft. Although nowhere near as much as the interest paid by the likes of Manchester United and Arsenal, this certainly does not help the club’s finances. 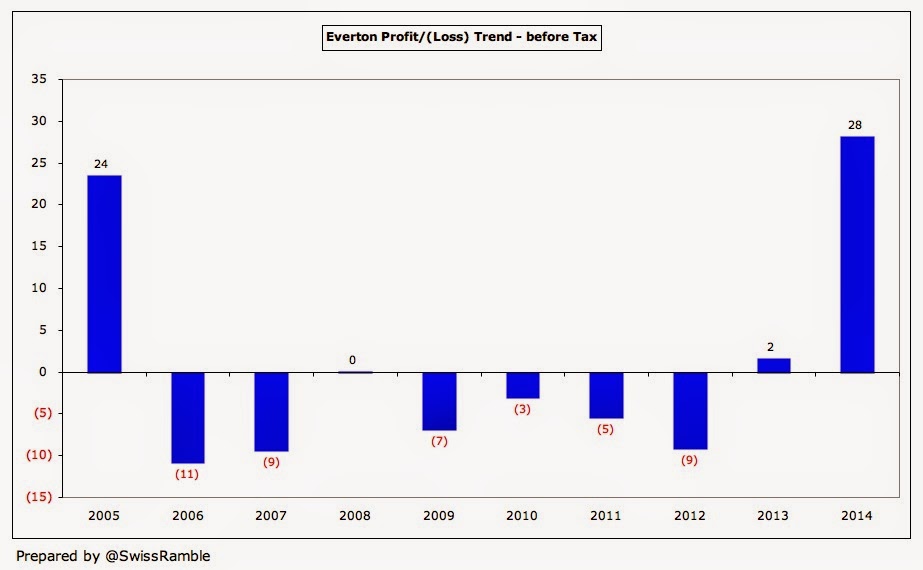 However, it is fair to say that Everton’s financial performance has been improving. Up until the last two years’ profits, Everton had been consistently loss-making. In fact, they only managed to record a meaningful profit once in the previous eight years – and that was only due to Wayne Rooney’s big money transfer to Manchester United in 2004/05. Since the sacrifice of their youthful prodigy, the club suffered £45 million of cumulative losses between 2006 and 2012 before they found a solution to their financial woes – or, perhaps more accurately, Sky/BT signed a new television deal. 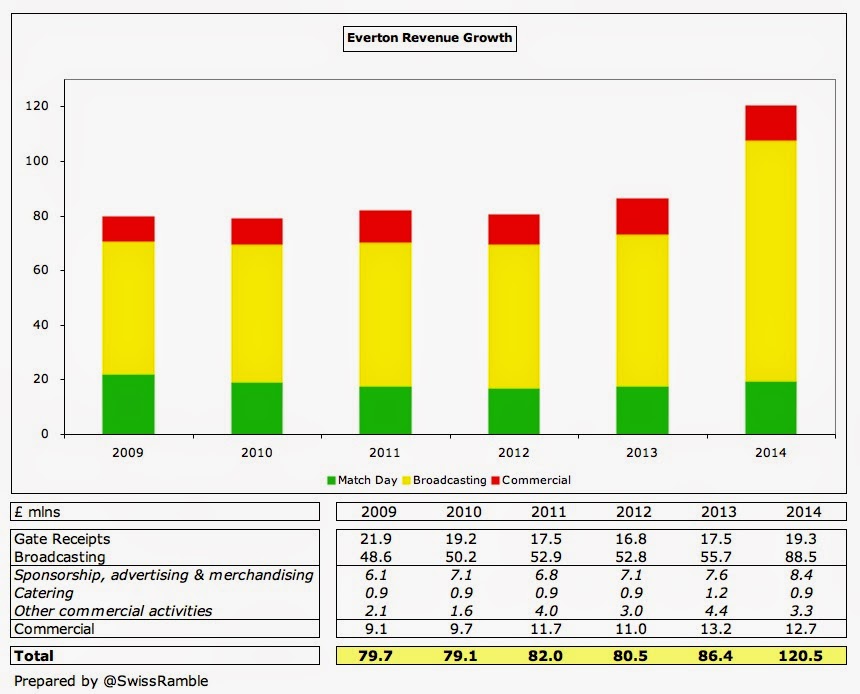 Since 2009 Everton’s revenue has grown by 51% (£41 million) from £80 million to £121 million. Not bad, but virtually all of this is due to the Premier League TV deal (£40 million). Commercial revenue has only risen by £4 million in the same period, while gate receipts have actually fallen £3 million. 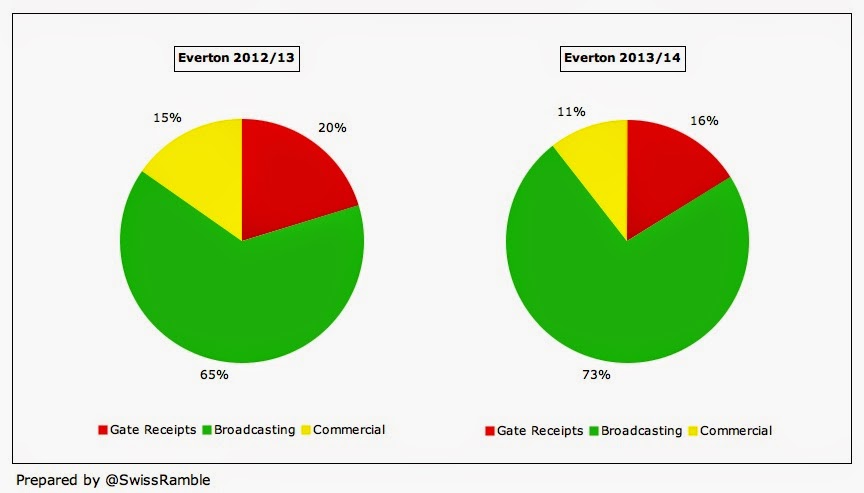 Everton’s revenue mix shows their reliance on Premier League TV money: broadcasting 73% (up from 65% in 2013), gate receipts 16% and commercial 11%. This is by no means unusual in England’s top division, but it does highlight the strategic areas of focus for the Everton Board. 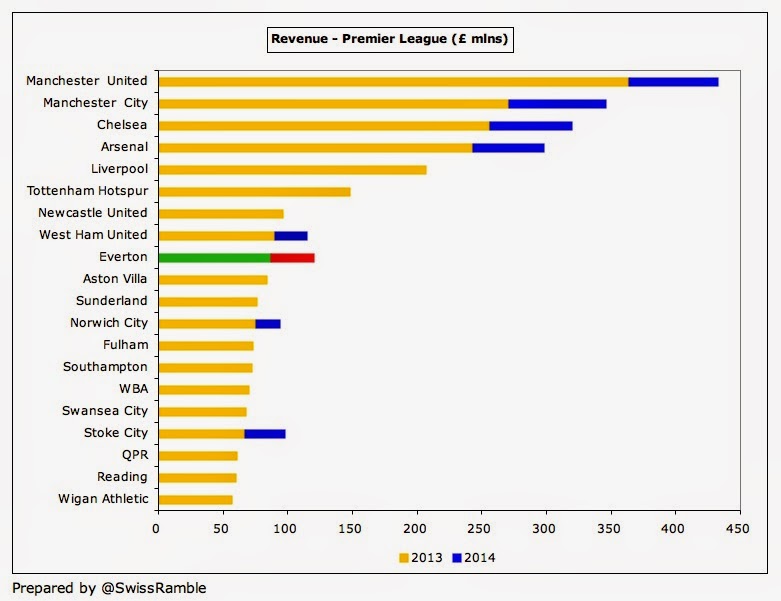 Despite significant growth, Everton’s 2014 revenue of £121 million is still a lot lower than the Champions League elite, e.g. it is less than a third of Manchester United’s £433 million. On the other hand, Everton did have the 9th highest revenue in the Premier League in 2012/13, which is pretty good, particularly if you consider that they have consistently outperformed their revenue level, e.g. finishing two places above United last season despite all their rival’s riches.

All Premier League clubs will obviously benefit from the new TV deal last season, but we already know that Everton have overtaken West Ham in 2013/14 after the Hammers announced their results, largely due to Everton’s TV money increasing at a faster rate. 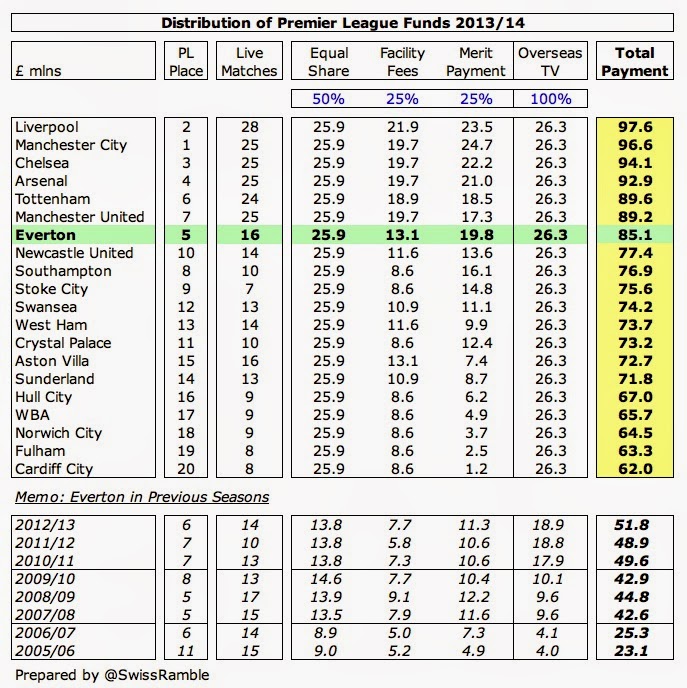 In this way, Everton’s Premier League TV distribution increased by £33 million from £52 million to £85 million in 2013/14, while West Ham’s share only increased by £25 million (£49 million to £74 million). As well as the new deal, Everton’s share was boosted by a higher finish (5th place compared to 6th the previous season) and more live televised matches (16 compared to 14). 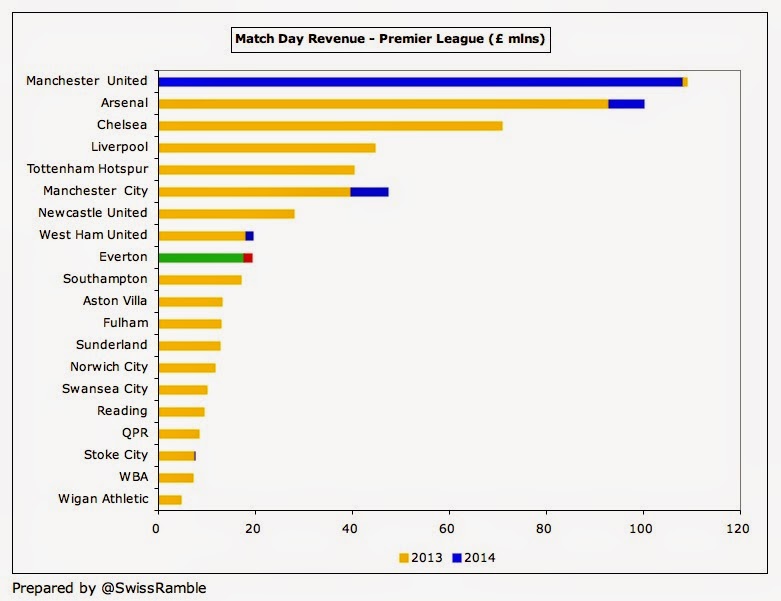 Nevertheless, match day revenue is still very low at Everton compared to the leading clubs with Manchester United and Arsenal both generating more than £100 million a season. No wonder that chief executive Robert Elstone has stated that a new stadium “remains a big priority”.

In fact, Everton have confirmed that they are looking at a new 50,000 stadium in Walton Hall Park, though supporters will be cautious, given how the “Destination Kirkby” project collapsed in 2009. It is also believed that the club would require support from the local council in the same way that Manchester City’s move to the Etihad Stadium was facilitated.

Although Everton announced that sponsorship, advertising & merchandising revenue was up £0.8 million to £8.4 million, total commercial revenue was actually down £0.5 million from £13.2m to £12.7m. This is mainly due to other commercial activities that were down £1.1 million from £4.4 million  to £3.3 million, because 2013 included a UEFA payment for players who participated in 2012 Euros. 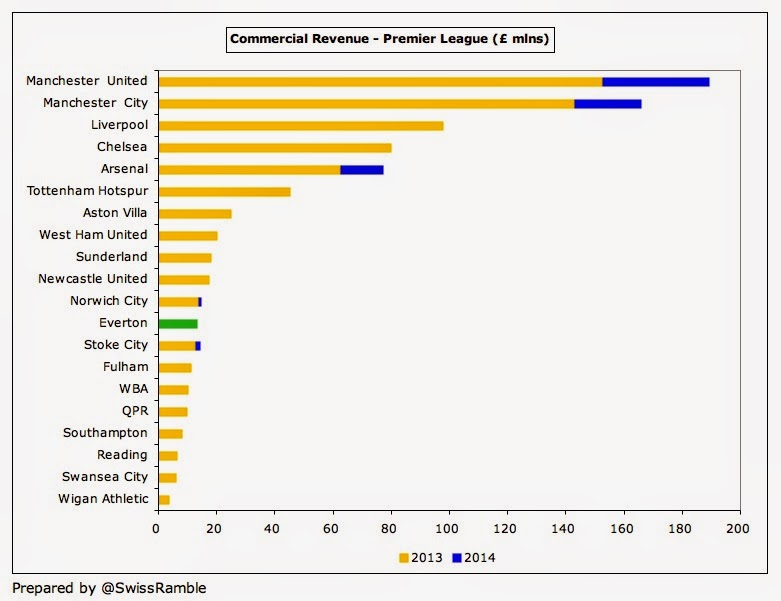 Although Everton have improved their commercial operations in the last few years, the revenue remains on the low side at £13 million. To place that into perspective, this is less than a third of Tottenham’s £45 million. Although the club complained that it was difficult to compete commercially with clubs “regarded as having a greater international profile”, such as Manchester United, Liverpool and Arsenal, Everton are surely at least as attractive a proposition as clubs like Spurs and Villa.

To be fair, the club outsourced its merchandising and catering operations in 2006 and its retail business to Kitbag in 2009, which means that their reported income is much lower than it would be if these activities were still in-house (estimated at around £7 million) and there are signs of improvement on the commercial side. 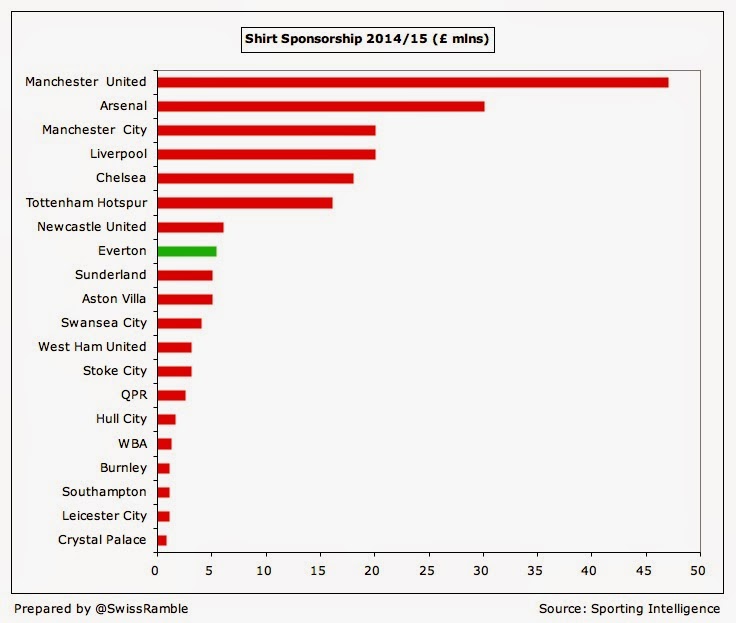 In March 2014 Everton extended their shirt sponsorship with Chang (for the fourth time) for three years. The deal is worth £16 million, so produces £5.3 million a year (compared to £4 million from the previous deal).

A month earlier, Everton announced a new kit supplier deal with Umbro, replacing Nike from June 2014. The previous Nike deal was worth £3 million a season, while Umbro’s is understood to be a club record for such a deal. Although the figures have not been divulged, some reports suggest that it might even have doubled to £6 million, though this will not become clear until this season’s results are announced. 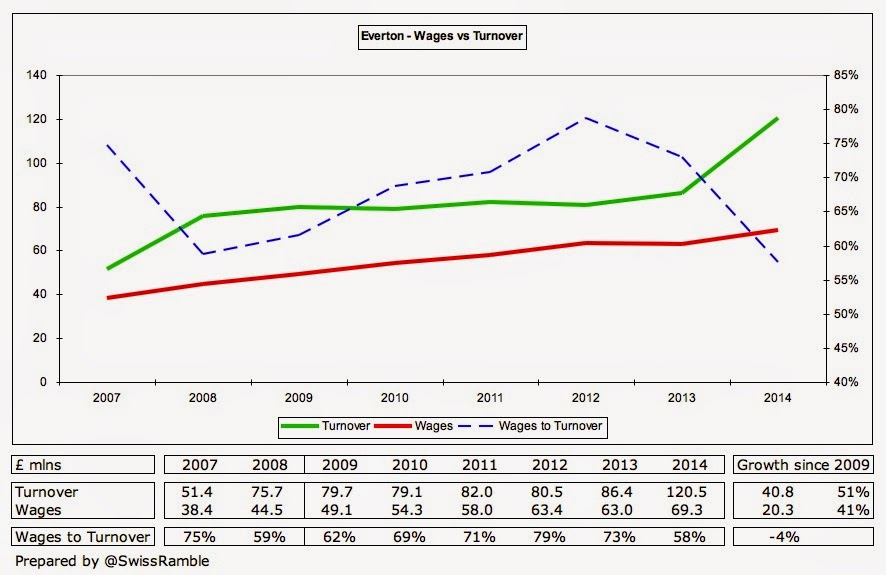 Everton’s wage bill was up 10% (£6 million) to £69 million (2013 £63 million), but the wages to turnover ratio fell from 73% to a respectable 58% following the high revenue growth. The ratio would be even lower if the club had not outsourced its retail and catering business. 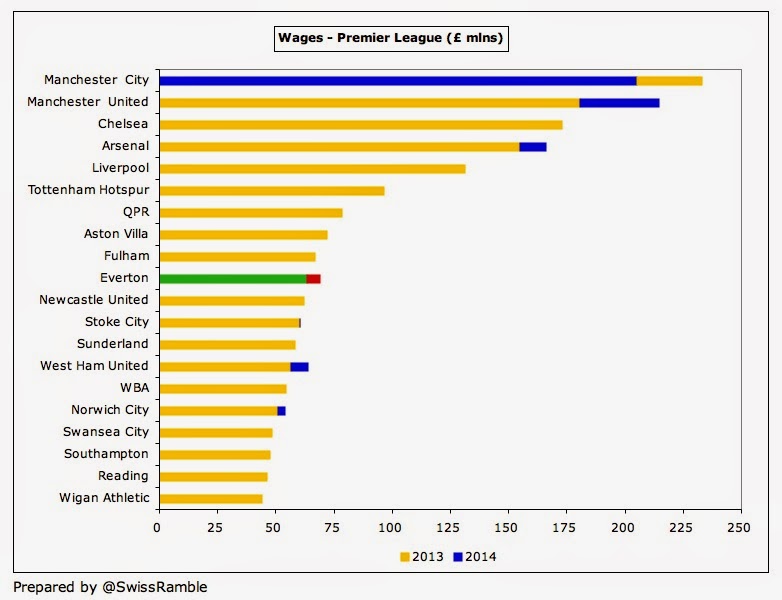 Everton’s ability to outperform their financial resources is further emphasised by their relatively low wage bill, which was only the 10th highest in the Premier League in 2012/13, even behind QPR and Fulham. To place it into context, it is less than a third of the two Manchester clubs and less than half of Arsenal, Chelsea and (probably) Liverpool. 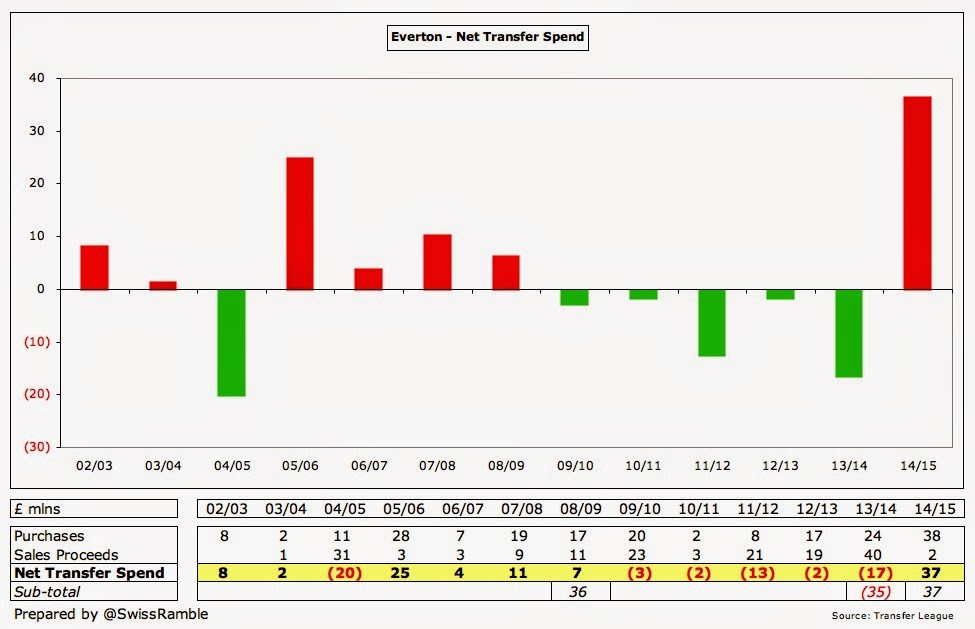 However, that certainly changed this summer with the big money (£28 million) acquisition of Romelu Lukaku from Chelsea, which nearly doubled Everton’s previous record purchase (Fellaini at £15 million), plus Muhamed Besic for £4 million and Gareth Barry for £2 million. Bizarrely, it has not (yet) lead to an upsurge in the club’s fortunes on the pitch. As they say, it’s difficult for a leopard to change its spots.

The recent change in approach in the transfer market has been reflected in player amortisation (the annual cost of writing-off transfer fees), which rose by 75% (£8 million) from £11 million to £19 million in 2013/14. And this is before the Lukaku purchase, which will only be included in the 2014/15 figures. 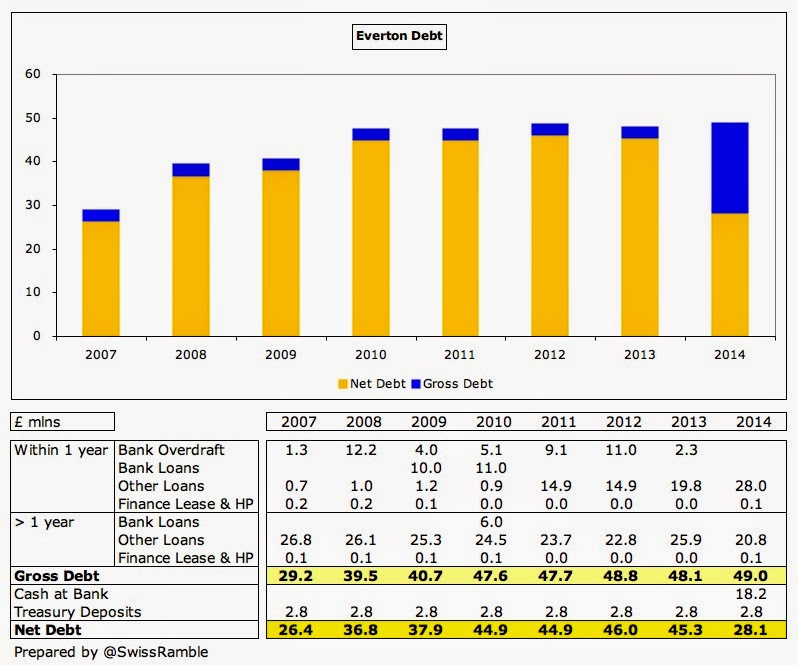 In fairness, the club has managed to hold the gross debt at the £48-49 million level for the last five years after it more than doubled from £20 million in 2005, when Elstone explained, “our pursuit of success has stretched our finances.” The result of this strategy is clear to see, as the club is burdened with a 25-year loan from Bear Sterns (now at £22 million), which has the advantage of being long-term, but carries a high interest-rate of 7.79%, leading to annual payments of £2.8 million. Other loans include a £21 million loan securitized on Premier League TV money at 8.8%. This is renewable in August 2015, but is probably not a concern, given that it has been renewed for a number of years.

Everton’s chief executive, Robert Elstone, commented, “Our financial results highlight growing revenues, costs remaining under control and debt reducing, and when we combine that solid financial base with a playing squad that continues to improve and increase in value, we have every right to be confident and positive on future prospects.”

That’s fair enough, though it is somewhat ironic that Everton’s stronger performance off the pitch has not been mirrored (to date) in the Premier League this season, though injuries have clearly played a part in that. There is also the nagging concern that young talent, such as Ross Barkley and John Stones, will still be sold off at some stage. Maybe. In any case, Everton can at last begin to see some blue skies, at least from the financial perspective.
Posted by The Swiss Rambler at 10:39 AM