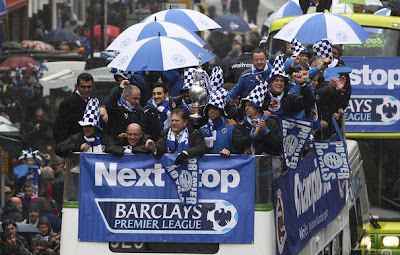 Back in April I posted a summary of the 2011/12 Championship finances on Twitter, but since then I have received a few requests to post them in a blog as a useful resource for fans of those clubs, so here we go.

I’m not going to provide detailed analysis at this stage, just the key figures from the accounts plus some graphs for comparisons against others.

All these figures have been taken from the clubs' published accounts, though I have made a couple of presentational adjustments in order to prepare like-for-like comparisons between clubs. In particular, not all clubs use the same revenue classification, so I have had to make estimates on the revenue split for Barnsley, Blackpool, Crystal Palace, Hull City and Peterborough United (though obviously leaving the total revenue unchanged).

The split should be reasonably accurate, given that the Championship TV distributions are the same for all clubs (excluding parachute payments), while match day revenue has been estimated based on factors like average attendances.

In such comparisons, there is also the question of which accounts to use, as some clubs have more than one set, e.g. accounts for the football club and a holding company. I have opted for the accounts that have been most widely publicised, i.e. on the club website or in the local press, but appreciate that this may cause some differences in the rankings.

Obviously, the 2011/12  figures are now a whole season out-of-date, but this is the last year in which clubs have published their accounts, so it is the latest available, if not the greatest.

Finally, neither Coventry City nor Portsmouth published accounts in 2011/12, due to their ongoing financial difficulties. May they enjoy better times in the future.

Despite all these caveats, I hope that the comparisons are still of some use.

An overview (in alphabetical order) of the club's profit and loss accounts. 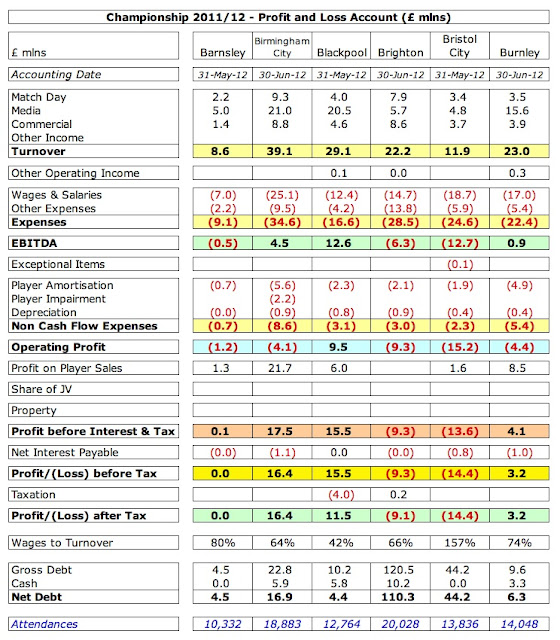 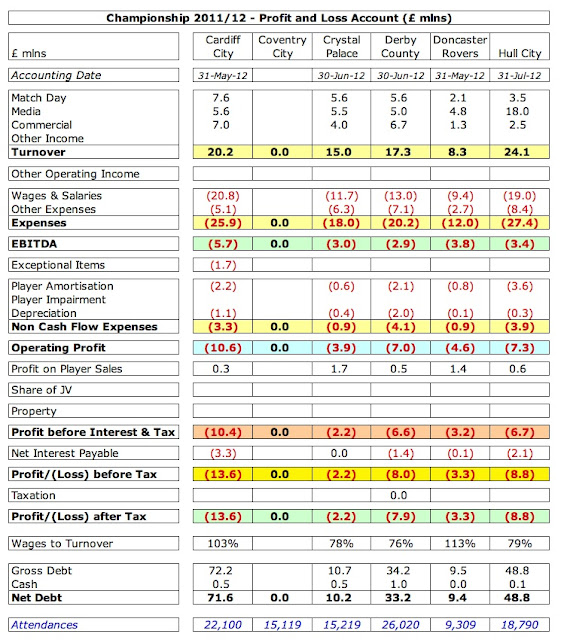 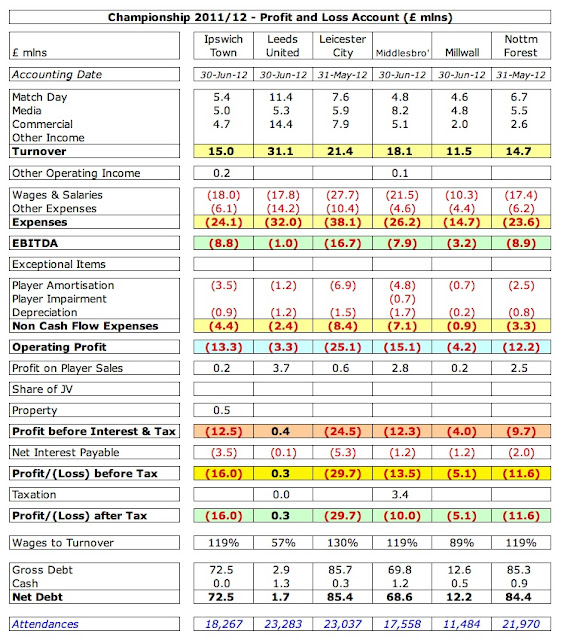 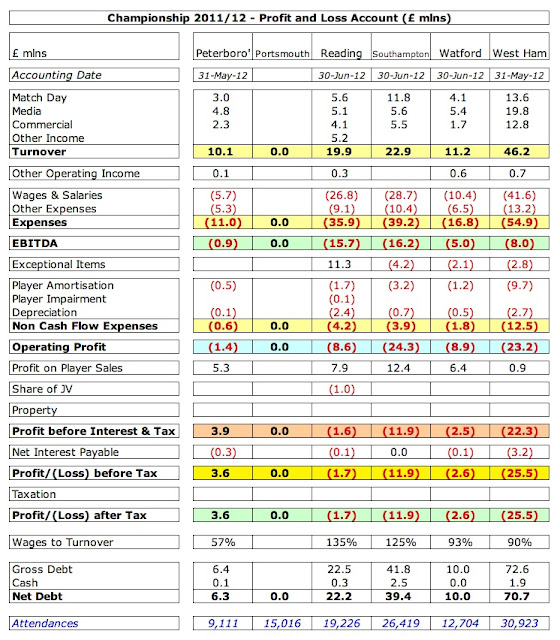 Only six (out of 24) clubs made profits before tax in 2011/12: Birmingham City and Blackpool led the way with around £16 million, followed by Peterborough £4 million, Burnley £3 million, then Leeds United & Barnsley just breaking even. 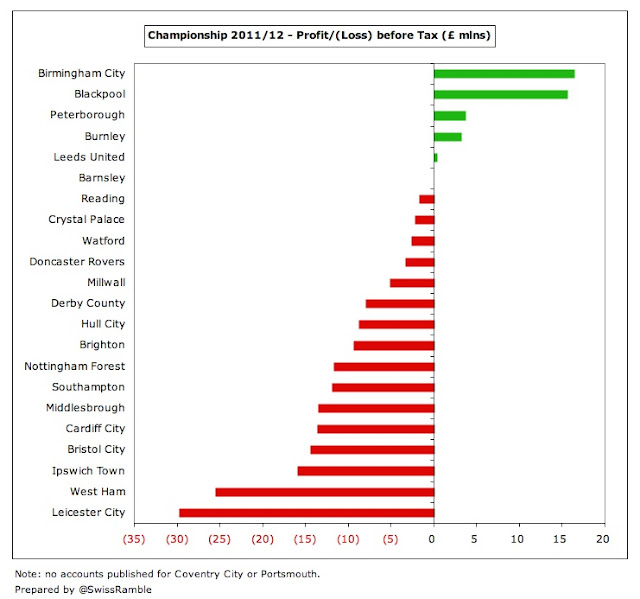 A similar story for profit/losses after tax, though Middlesbrough benefited from £3 million of tax credits, while Blackpool's £4 million tax bill brought their net profit down to £12 million. 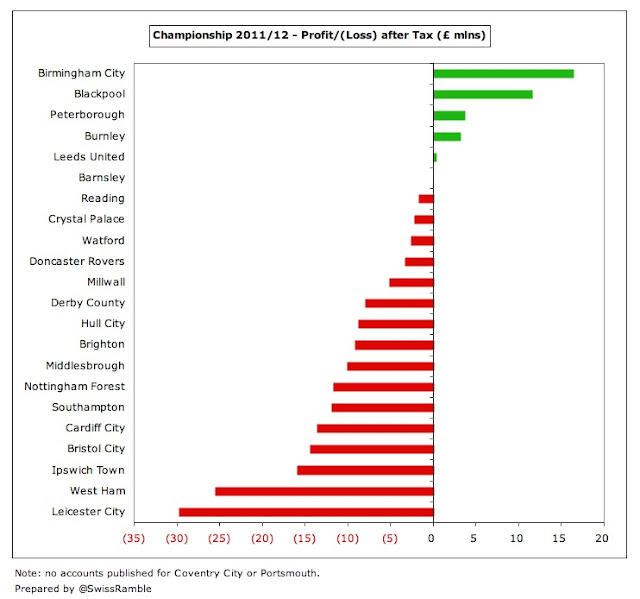 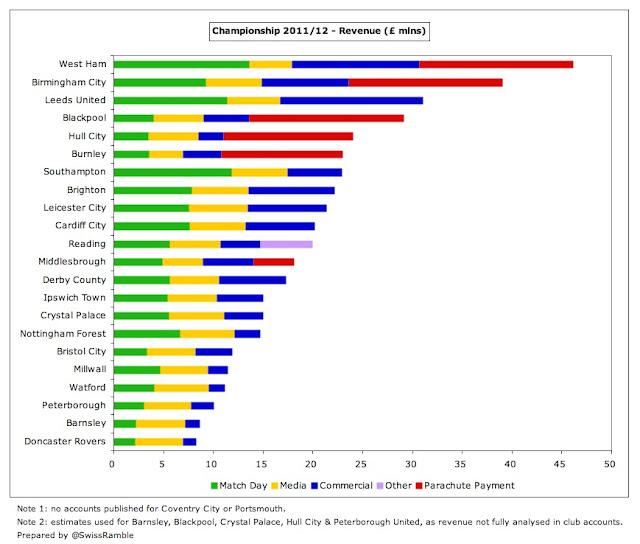 Of course, those total revenue figures are heavily influence by parachute payments received when clubs are relegated from the Premier League. If these were to be excluded, a slightly different picture emerges with Leeds United top of the pile. West Ham and Birmingham City  are still right up there, but are then followed by Leicester City, Southampton and Brighton.

This disparity will be even more evident from next season (2013/14), when the parachute payments will increase by 23% from £48 million to £59 million (over four years). That will be split as follows: £23 million in year one, £18 million in year two, then £9 million in years three and four.

Note – Reading’s “Other Revenue” refers to income from their hotel. 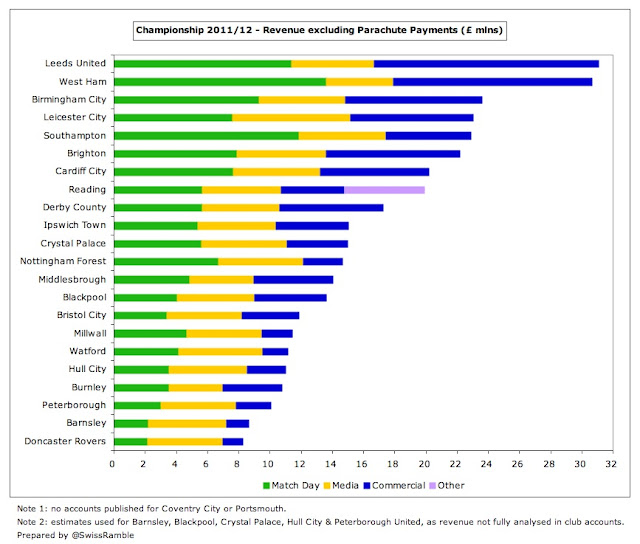 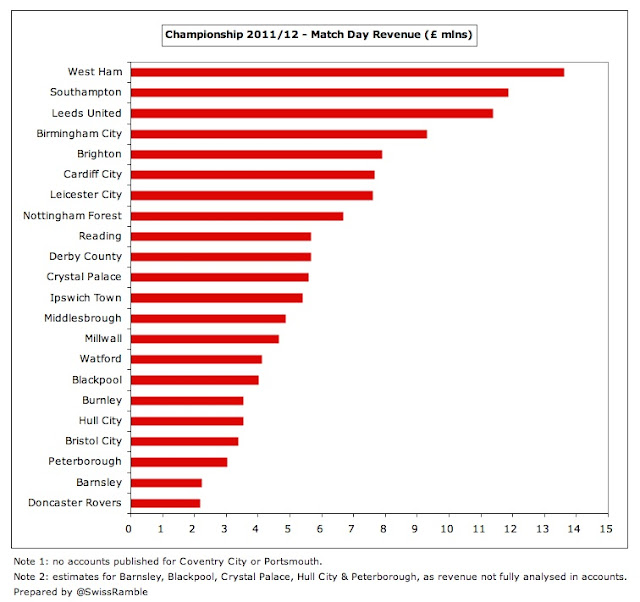 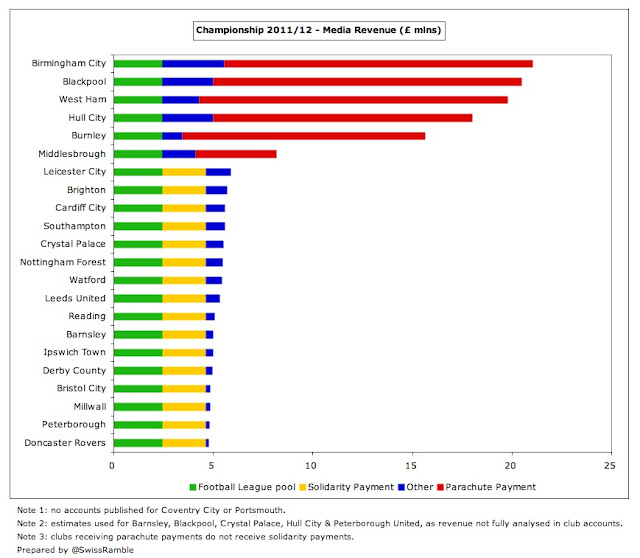 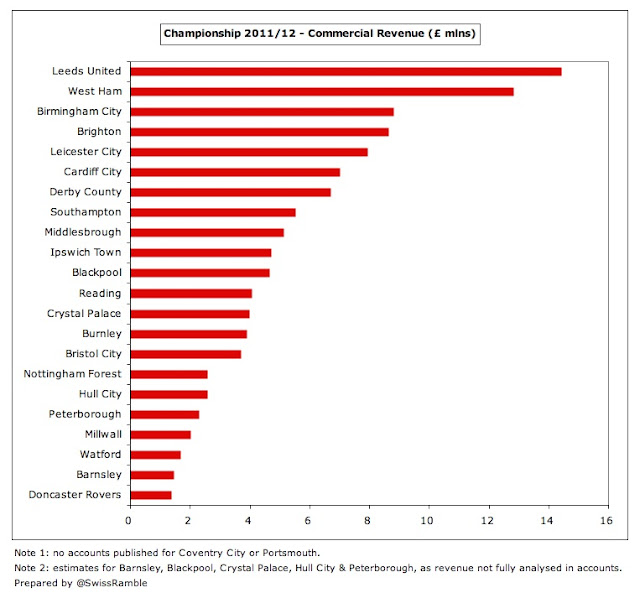 Only two clubs made more than £10 million from player sales: Birmingham City £21.7 million and Southampton £12.4 million. Following relegation, Birmingham “had to raise funds through the sale of players”, including Roger Johnson, Craig Gardner, Liam Ridgewell and Jean Beausejour. Indeed, without these player sales, the Blues would actually have reported a loss in 2011/12.

It is interesting how important profit from player sales can be to a club's business model with earnings from this activity worth more than 50% of a club's recurring revenue at four clubs: Birmingham, Southampton, Watford and Peterborough. 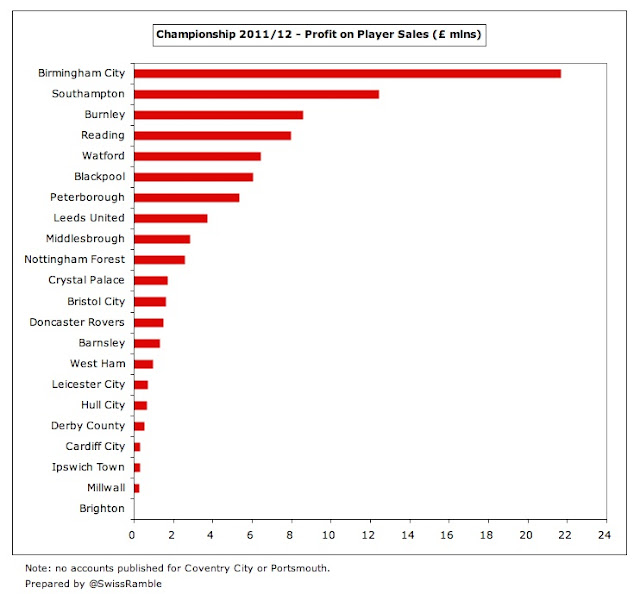 So the three promoted clubs in 2011/12 had the highest, second highest and fourth highest wage bills. Make of that what you will. 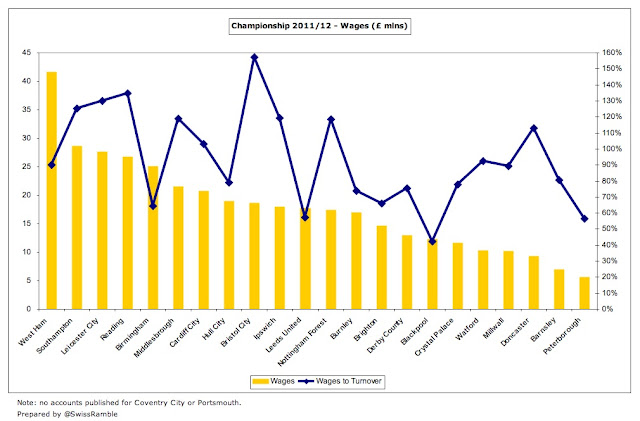 Given the massive financial prizes available on promotion to the Premier League, this willingness to push the boat out is understandable to a certain extent, but is also one of the reasons that Championship clubs have embraced Financial Fair Play

At the other extreme, fans of Blackpool (42%) and Leeds United (57%) might feel that their clubs could have shown a little more ambition. Peterborough's low 57% ratio reflects their sustainable business model. 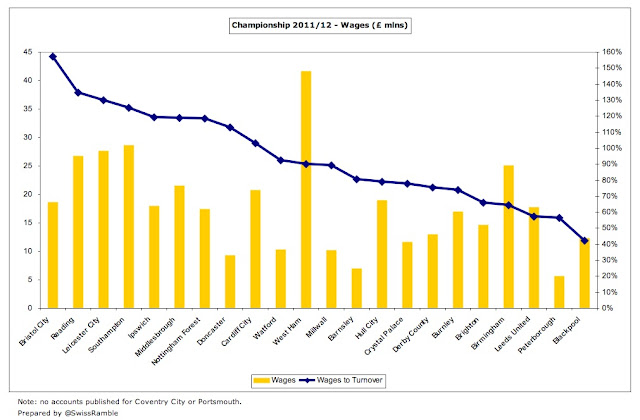 In terms of other expenses excluding player amortisation and depreciation, Leeds United and Brighton were easily the highest at £14 million, largely due to high stadium costs. 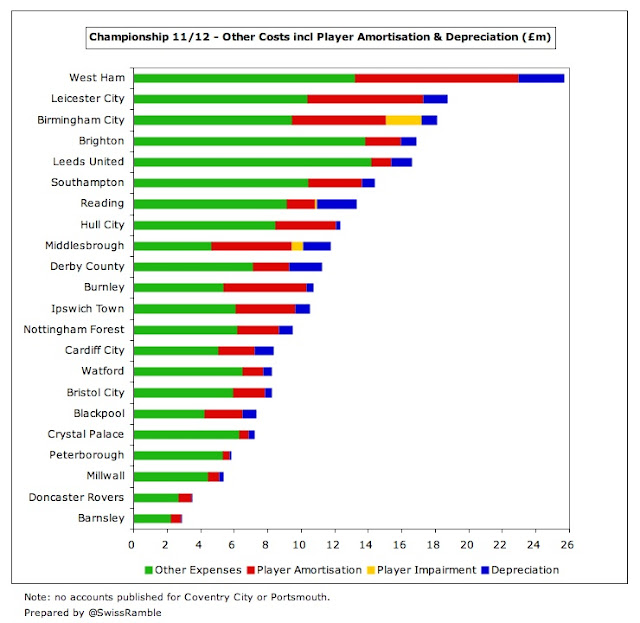 In comparison to their annual revenue, many clubs have significant debt, though it is invariably provided by the owners, as opposed to the bank: Brighton £120 million, Leicester £86 million, Nottingham Forest £85 million, West Ham £73 million, Ipswich Town £73 million and Cardiff City £72 million. 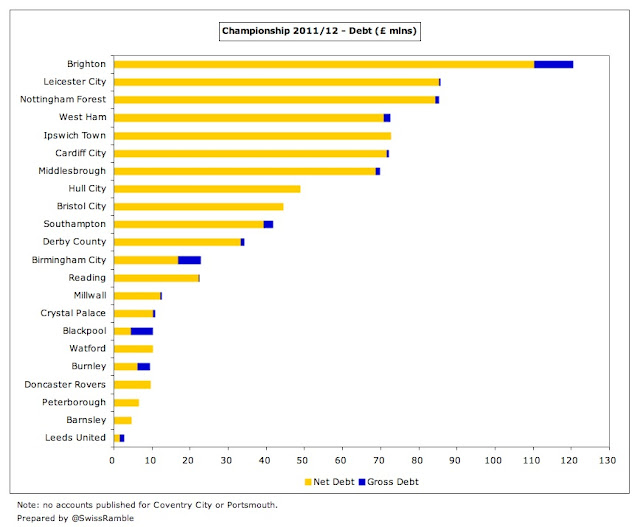 The highest net interest payable recorded in the accounts were from Leicester City £5.3 million, Ipswich Town £3.5 million, Cardiff City £3.3 million, West Ham £3.2 million and Hull City £2.1 million. It should be noted that interest paid is not necessarily equal to the interest payable figure in the profit and loss account, as it is sometimes only added to debt (and so not actually paid), as was the case with Leicester, Ipswich and Cardiff.

Furthermore, the debt at some clubs is interest-free, e.g. Brighton. 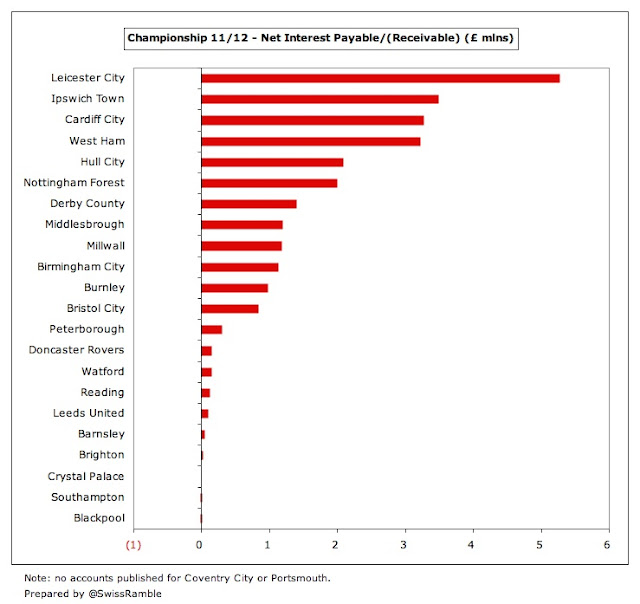 For the sake of completeness, I have included average attendances, though most clubs do not formally publish these figures in their accounts. These figures have been taken from the excellent Soccerway site and show some pretty solid attendances in England's second tier with West Ham attracting nearly 31,000. 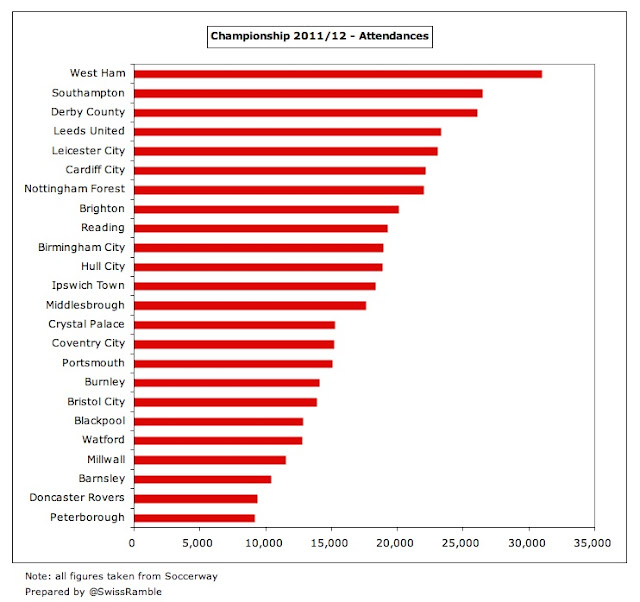 That concludes the voting of the Swiss jury for the financial overview of the Championship in the 2011/12 season. Numbers on their own are not that interesting (unless Soft Cell are singing about them) and are certainly not meant to suggest that one club is, in some way, “better” than another club.

That said, a club’s finances often go a long way to predicting how the team will fare on the pitch, so they’re not to be completely ignored either, especially with the Championship implementing its own version of financial fair play.
Posted by The Swiss Rambler at 11:27 AM