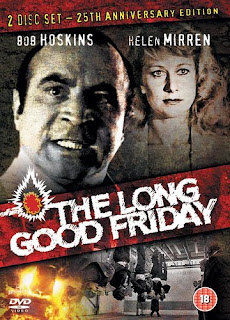 For more than ten years there’s been peace – everyone to his own patch. We’ve all had it sweet. I’ve done every single one of you favours in the past. I’ve put money in all your pockets. I’ve treated you well, even when you was out of order, right? Well now there’s been an eruption. It’s like fuckin’ Belfast on a bad night.

When London crime lord Harold Shand’s world is suddenly torn apart by a series of murders and exploding bombs from an unseen enemy, this is how he summarises the situation to the rival gang bosses he has rounded up and hung upside down on meat hooks in the local abattoir.

This is just one memorable scene from The Long Good Friday, which resurrected the British gangster film in 1980. Director John Mackenzie described it as “just a damned good gangster movie”, but it is so much more than that. The film is a twisty tale of murder and double-cross, much more densely plotted and intelligently scripted than the standard fare. Starring Bob Hoskins and Helen Mirren, it’s a fast-paced thriller that strikes the perfect balance between humour and seriousness. The journey is a wild ride, but its memorable characters and earthy London dialogue superbly hold it together. In the late 90s, the wise folk at Empire magazine named The Long Good Friday as the best English film ever made. Praise indeed, when you consider the competition.

The film’s protagonist is Harold Shand, gloriously portrayed by Bob Hoskins, who is the undisputed kingpin of the London underworld, but aspires to become a legitimate businessman, albeit with the financial support of the American mafia. He plans to use the influence he has secured with corrupt politicians and bent coppers to re-develop the urban wasteland of the Docklands as a venue for a future Olympic Games – sound familiar? Suddenly, all hell breaks loose: a trusted lieutenant is murdered, Harold’s mother is nearly killed in a car bombing; another bomb demolishes his lovingly restored pub; and a third bomb is found in his casino.

Casino Manager: It was a good night. Nothing unusual.

Harold: "Nothing unusual," he says! Eric's been blown to smithereens, Colin's been carved up, and I've got a bomb in me casino, and you say nothing unusual? 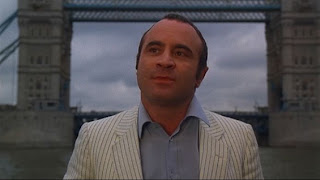 "The Power of London"

Scrambling to find out who would dare confront him, Harold faces an unexpected foe with even more power, ferocity and determination than himself:

Harold: Who's having a go at me? Can you think of anyone who might have an old score to settle or something?

Razors: Who's big enough to take you on?

Harold: Well, there were a few.

Harold: Yeah, they're all dead.

Harold’s tragic flaw is his unwillingness to admit that an enemy might best him. He needs information about the apparently unmotivated attacks and does not find it until it’s too late. Stupidly, it’s all a big misunderstanding, based on unauthorised decisions taken by Harold’s underlings, which have been misinterpreted by the IRA, who are engaged in a revenge operation. 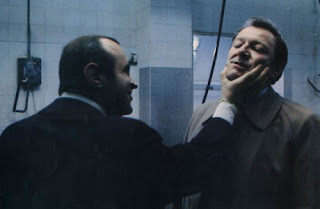 "Harold gets to grips with the situation"

Obviously a film with “Good Friday” in its title is not being too subtle with the religious references, but there’s a shocking edge to the symbolism with a car being blown up outside a church, a security guard being nailed to the ground by his palms and villains being “crucified” (albeit on meat hooks rather than the cross). Harold is an unlikely Christ figure, but his call for a “new London” wickedly echoes the Christian call for a “new Jerusalem”. Finally, the revelation of his antagonists as the IRA reminds us that the explicit difference between the Irish and the English is above anything religious.

The Long Good Friday is a film about change. The movie features a London standing on the threshold of something, prophetically alluding to the 1980s development of a global centre, based more on financial services than traditional manufacturing. Harold sees himself as the bridge between the old (London’s violent criminal past) and the new (“a businessman with a sense of history”). His brand of ruthless, thrusting capitalism pretty much epitomises Thatcherite values. A self-made man, he is the ambitious working class patriot who would get on his bike and ride over anyone to get ahead.

The film’s other uncomfortable message for Thatcher’s government was the portrayal of the IRA as an invincible force that could not be stopped, even by London’s most vicious thugs. Given that this was the height of the Irish troubles, it was perhaps not surprising that the ensuing brouhaha delayed the film’s release by a year.

At the same time, the film is almost a Shakespearean drama of power and ambition, politics and hubris. Though he’s basically an East End boy made good, Harold’s vivid, coarse vocabulary has echoes of the Bard, “I’ll have his carcass dripping blood by midnight”. However, just as this modern-day Macbeth looks to be consolidating his power, the downfall arrives with tragic elements of self-defeat and inevitability. 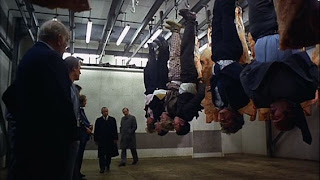 Nevertheless, this is most definitely Bob Hoskin’s movie, as he seems to live, rather than act, one of the greatest roles in movie history. His intensely physical presence sears the screen with burning intensity, bringing out every nuance of the script. He employs so much depth and subtlety in his portrayal that we actually find ourselves caring for this cruel, violent man, probably because he’s also a complex, deeply human mass of contradictions. We watch him struggling in vain to fight his brutal nature (an attack with a broken bottle is particularly shocking) and feel his impotent confusion as his world crumbles. Throughout the drama, he remains a larger-than-life figure with a lovely turn of phrase:

Pool Attendant: They kept it all incognito. They're gonna collect the body in an ice cream van.

Harold: There's a lot of dignity in that, isn't there? Going out like a raspberry ripple.

Harold: Alan found him dying. He'd been nailed to the floor.

Jeff: When was this, then?

Harold: Well, it must've been just after you saw him and just before Alan saw him. Otherwise, you'd have noticed, wouldn't you? I mean, a geezer nailed to the floor. A man of your education would definitely have spotted that, wouldn't he?

Harold: I want the name of your top grass.

Parky: He trusts me Harold, I've known him a long time.

Harold: Then you should remember his name.

Helen Mirren, the thinking man’s sex symbol, is also fantastic as Harold’s devoted girlfriend, Victoria, a genuine power behind the throne, well-spoken and diplomatic where Harold is crude and vicious. She is a tough, shrewd operator who valiantly tries to hold together Harold’s collapsing world.

There are many other familiar faces in the cast: Denzil from Only Fools and Horses has a very nasty meeting with a machete as Errol the Ponce; Charlie from Casualty experiences an old-fashioned glassing; while Pierce Brosnan appears as an uncompromising IRA hitman. Another important “character” is the music – a chilling, swaggering score that drives the film forward.

I'm glad I found out in time just what a partnership with a pair of wankers like you would've been. A sleeping partner's one thing, but you're in a fucking coma! No wonder you got an energy crisis your side of the water!

What I'm looking for is someone who can contribute to what England has given to the world: culture, sophistication, genius. A little bit more than an 'ot dog, know what I mean? 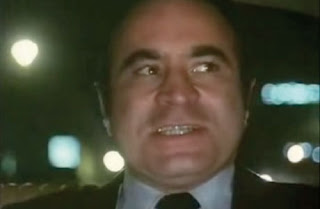 The final shot of the film is a remarkable two-minute close-up of Hoskins’ contorting face, as he realises that he is powerless against the forces of terrorism. Every emotion is visible from anger to shock to horror to rueful acceptance. A classic ending to a classic film.

Posted by The Swiss Rambler at 6:51 PM